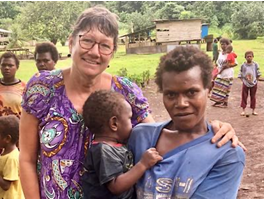 Recently Jan and Annette Wols returned from their two-week trip into Lamogai. They visited nine Lamogai churches, and the leaders from the other eight churches visited them in north Lamogai. It was one big party, to be able to see all their friends again after four years.

All the hard work that Jan, Annette and their co-workers did over the years, as fragile as they were at times, (old clay pots) have paid off in all these churches that are still going on with the Lord. He has been faithful to multiply His treasure throughout Lamogai into the second and third generation.

The people looked after Jan and Annette and showed their appreciation, by giving them the best places they had and by butchering and cooking pigs. The leaders organised transportation for them by boat and truck and they did not allow Jan and Annette to pay for it. On top of this, they collected 12.000 kina (approx. £2500) for the upcoming printing of the whole Lamogai Bible. The printing of the Lamogai Old and New Testament is the project for the coming years.

In every village, they were invited to speak and everywhere they were spoiled with a meal and bringing up good memories of the past. They also met up with a woman who, as a baby they were able to give food supplements as her mother had died. Now she has her own baby boy!

In both north and south Lamogai the churches are preparing for church planting in two new places. In North Lamogai the churches stepped up the work among their youth and young adults to prepare them for an active future in their church and community. Jan and Annette are so thankful the Lord allowed them to do this trip and see what the Lord has done to continue to build His church in Lamogai. They are so encouraged.

Currently, Jan and Annette are on their way to the Netherlands for their six- month home assignment. They plan to live with their oldest daughter and family. They have planned a good chunk of time with all of their children and grandchildren in the Netherlands and in Norway. The other priority is seeking medical help for the ongoing problems Jan has with kidney stones.

After the summer holiday they have set aside the time for their churches and groups; to report on the work and plans for Papua New Guinea and Lamogai.

Jan and Annette plan to return to PNG in November. All these plans are in the Lord’s hands.