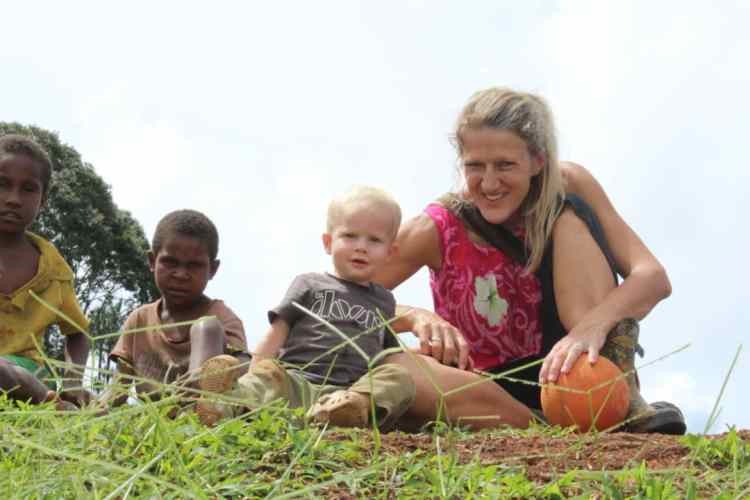 Philip and Natalie Hansen with Louis and Timon had a lovely extended break at the mission centre. They had to extend it because Philip’s teeth needed some attention. They are thankful for the extra time they had in Goroka as it helped them to recover from the stress of the last year and helped Louis get over the loss of his beloved friend Oscar. (Their co-workers Steve and Gerdine Stanley and their son Oscar are currently on home assignment in the UK).

On their return to the village, Philip and Natalie received some sad news that two people had died. One was a baby that Natalie had treated before with a terrible infection. The infection returned while Philip and Natalie were gone and the little one died. It is hard for them to see the parents suffering with that and not being able to talk much about it as it is not their custom. Another older lady died when she was by herself in a garden house. She used to visit them from far away and even brought them wild eggs to eat.

Natalie was able to take the cast off a young man who had broken his leg. He seemed disappointed that he was not able to suddenly just walk perfectly again but has to practice and strengthen his leg. It is a good thing that it appears to have grown together well.

They are unsure if there has been any coronavirus in the village. They see many kids with a high fever for over two weeks and patterns that make them think of Typhoid but they do not know for sure.

On the one hand they find it good, to be back but on the other hand there is the realisation of how hard life is in the bush and how much they still need to learn about the culture. Sometimes it is hard for Philip and Natalie to have a normal conversation with the villagers because they are afraid to say the wrong thing. This is after more than a year of their living in Kovol. Their kids also find it hard to connect with the village kids. Pray that one day they will enjoy playing together.

Timon struggled this time with the transition back to Kovol. Initially he did not want to leave Natalie’s side, making even cooking a challenging task. Now he seems to be adapting again.

A German friend returned with them to Kovol. She is willing to help with their kids, so Philip and Natalie can spend more time in language study. Natalie feels that language is a monster and without God’s grace, she thinks she will never learn it. Their friend is such a joy and a blessing, not only to them but also especially to Louis. He is over the moon with her being there. Thankfully once she leaves in about two weeks, their co-workers the Stouses who have four boys, will return from home assignment and join them in the village. They are thankful for their amazing team.