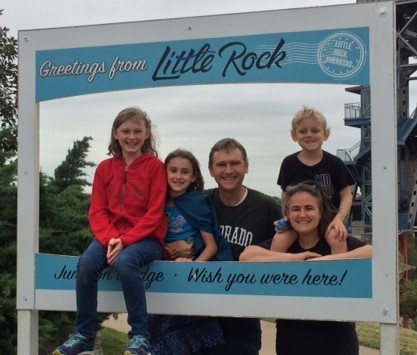 Azarja and Renee Groot with Elliora, Esther, and Ezra are still very much in the process of adjusting to life in the USA.

It has been almost six months since they moved from South Africa, and a lot has happened. Some of their plans have gone as expected. The month of April, for example, was spent at a re-entry course for missionaries and then catching up with friends along the way. Other activities, however, were not part of the original plans. Azarja spent the first weeks of July flying for a kid’s camp. In the midst of it all, and despite the challenges and stress, they feel blessed in more ways than they are able to share. Please continue to pray for them in this new chapter of their lives.

Recently Azarja spent time designing banners, creating flyers and setting up a display/booth for doing some fundraising for Mercy Air at an air show. It was exciting to share about the ministry with those who visited. Azarja and Renee are active members on the Mercy Air board in the USA and hope there will be many more opportunities to do this type of work (representation, recruitment, and fundraising). They are grateful for the open doors God has given to share their stories about what He has done and continues to do through Mercy Air in Africa.

In their search for affordable housing, they have decided to combine two mobile homes into one, on a small plot in Lakehills, Texas. Over the coming months, Lord willing, they will be working hard to repair and remodel these into a new home while they live/camp in Renee’s parents’ caravan/camper. It is an adventure to be sure! Pray for them as they make a home in a new community.

A few months ago, Azarja’s former colleague asked him to help with a boys’ summer camp (July). The camp offers an opportunity for kids to experience aviation through some ground instruction, flight simulators and then doing several flights in real aircraft. With finances being tight and the opportunity to engage with a new generation through aviation, Azarja was happy to get involved. It was two and a half weeks of non-stop flying and simulators that also turned out to be a great way for him to get comfortable in the USA aerospace system again and fly some new machines. What a blessing!

This summer Renee and the kids have been involved in various activities at Central Christian Church. Most recently Esther and Ezra participated in a small musical production in which they sang and even had a few lines to say ‘on stage.’ In June, Elliora was able to attend a weeklong Christian summer camp about eight hours drive away. It was a big step to go there with two people from their church (no family), but she did great. At the end of the week, she was awarded the female ‘Camper of the Week’. Pray that the children will adjust well.