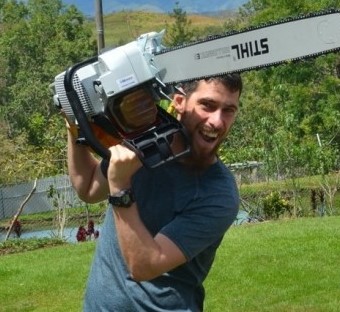 Living rough in the jungle and working with chainsaws eight hours a day away from families is tough. Steve Stanley and the team in Kovol, Papua New Guinea are feeling very, very tired.

They are tired in most every way and getting up the mountain trail in the morning is a mental and physical slog. Progress is steady, but not particularly encouraging as there is always hundreds of planks left to cut.

Steve found that it was good to read Hebrews 12 again. So good, in fact he has been working on committing the whole chapter to memory. “Therefore, since we are surrounded by so great a cloud of witnesses, let us also lay aside every weight, and sin which clings so closely, and let us run with endurance the race that is set before us,”

Run with endurance. Not really a new idea, not really very insightful, and it could have been said by anyone. The thing that grabbed Steve though is ‘the race that is set before us’. It hit him, “this is the path God himself has specifically set for me.” It is no accident, nor is it simply the result of his choices it is something God Himself has set for His glory and for the benefit of the Kovol people.

Steve had been dreading the milling and house-building portion of tribal missions from the start. He is not a builder. It has always been a hurdle for him to get over, and hopefully quickly, but the reality has been as tough, stressful, tiring and unending as he had always expected. It made him weary, and so what a good word to hear – this is your race, set before you in purpose – don’t just write it off as a necessary evil, your Heavenly Father is treating you as a son. Hebrews 12:5-6

No matter how weary, this is Steve’s position, “It’s great to know that there is more going on than just aches and pains, cuts and scratches, slipping in mud, wrestling with discouragement over broken chainsaw parts, mice, mud, unsalted root vegetables for breakfast, lunch and dinner, bugs, burns and a seemingly unending task still before us. This is the race that was set specifically for me, and I’m not quitting.”