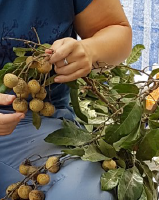 In Southeast Asia, S. is pretty used to the ‘new normal’. Schools are open, churches meet again and they are back to everyday life – still with masks and disinfection gel. But behind the scenes the drama is still unfolding: people are out of work, shops have closed for good, and with no tourists allowed in the country a big part of the country’s income is missing. It is hard to tell what lasting effects there will be from this crisis.

Please pray for wisdom for the government so that they know when to open the borders again.

In July, S. was able to take some time off and letting her brain rest for a while was really helpful. Language and culture study is really exhausting. Since she spent the time on holiday with her German speaking co-workers they could even speak German all day long.

During recent months, S. has had some ups and downs and sometimes it is just tough for her to continue with her language studies. But God always carries her through and sends her help in one way or another. She is not always rising like an eagle (Isaiah 40:31), she sometimes feels more like a snail, but God is giving her the strength for every single day. Not all at once, but day by day.

A great opportunity for her language and culture study was a mission trip her local church organised to the east of the country. Nine people from the church travelled for eight hours to go to the village that her language helper grew up in, where there is a group of believers, but not really a church yet. The pastor from her church is visiting them regularly to encourage them and to share the Gospel with those who are interested. It was great to see how hungry for God these people were (John 12:21). The believers there really need encouragement, because they face a lot of opposition. Please pray for them, that they would stay strong in their faith and that God would give them a shepherd to tend the flock for Him.

Because the borders are closed due to Covid some of S.’s co-workers are not able to return and are “stuck” in their sending countries. New missionaries are not able to start their ministry.

Please pray that God would open the borders soon so that all the people who want to serve Him can get into the country. In addition, pray for S. to have patience until then!

She spends most of her time on culture and language study, but is glad to be involved in some other projects as well. The kid’s club in the nearby village has restarted. Six to seven kids are attending it regularly and it‘s a joy for her to see how they listen carefully and understand so much. She is also meeting with two medical students again to help them practice their English and helps the son of her co-workers with Math in German.

Another great opportunity for her culture and language study was the Lamyai harvest. A family from her church has an orchard with Lamyai trees and they needed to be harvested. So many people came together to help pick the Lamyais. They worked for four days – in the heat and the rain – a great time of bonding. It was nice for her to have so much time with the family and eight hours of language was really helpful, but also tiring.