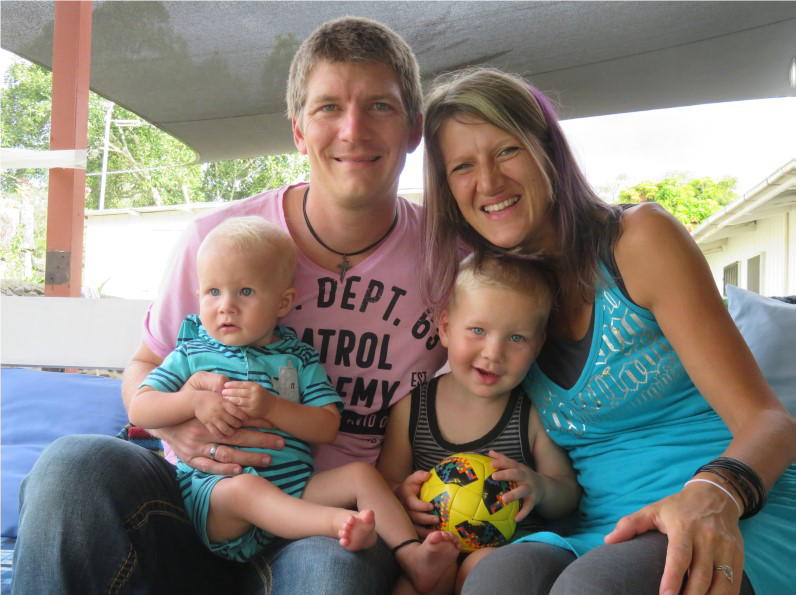 It had been exhausting for the team building their houses to the point that they could bring their families in. After that, Philip was still working six – seven days a week for the next six months and in the end, he just had no more energy to focus on language.

They needed a holiday. In July, Philip, Natalie with Louis and Timon flew out to Goroka to rest and see other missionaries that work to support them in their remote location in Kovol. They enjoyed seeing friends again and were also able to have some time alone as a family. Now they have returned to Kovol and established healthier boundaries for themselves so that they would not get too exhausted to continue.

Recently they were able to visit another village (several hours of hiking in the jungle on steep mountain trails). The people were very excited to see them. They were treated like royalty. It was their first night out as a family. The kids did well most of the time. They stopped at lots of different hamlets where people shared more food with them. Everyone loved to hold and play with their kids. They slept that night, but some of the people that had gathered to meet them stayed up the whole night telling stories. Even though the hike back was rough, they were glad to have made the trip. It is so important to build these relationships. It is hoped that they will be eager to listen to the teaching about God, creation, sin, Christ, salvation, etc. That was Natalie’s greatest motivation during the more stressful aspects of the trip.

As well as getting deeper into language, they have been able to attend different life events. Philip was able to go on an overnight fishing trip with several men spear fishing in the cold mountain river. They harvested peanuts as a family in a garden on the mountainside.

Philip and Natalie’s next-door neighbours feel very responsible for them and help them wherever they can. They also have been trustworthy and faithful. Please, pray for their salvation. They wish they could tell them the Gospel now, but they need to learn the language and understand their beliefs more before they can teach them. Please pray that God enables them to learn the language quickly, that they stay healthy and work well as a team. It is hard but they know it is going to be worth it.