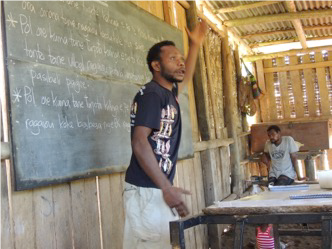 Last week Becky Preheim and co-workers Simon and Annika Flanagan and family were able to spend some time in the village.

Because it is rainy season, it took a few attempts before the weather was clear enough for them to be able to land!  Thank the Lord for the wisdom and safety He gives the pilots as they daily fly through rugged conditions!

Becky was so glad to be “home” again after 14 months. It was fun for her to see all the new babies and to visit with her Mengen friends.  Unfortunately, there were also some difficult times during their five days in the village. Becky’s translation helper’s father passed away just two weeks ago while he was at Hoskins. His mum is like Becky’s Mengen sister, so it was difficult for her to see her friends grieving. Just before she left the village to return to Hoskins, her friend told her that she is so thankful that all of her children are walking with the Lord so that after they die, their family will exist together in heaven and not apart from each other!  A special thing for a new widow to recognise. The son told her that he was sad but also happy that his dad was now in heaven. They had just been reading Revelation, so the glories of heaven took on special meaning for them.

On the Sunday, the Mengen believers put together a feast for the church and gave speeches thanking the Flanagans for returning to the village and Becky for her years of ministry with them. It was special and emotional for all of them. It was especially thrilling for them to see how excited they are that the translation is just a few weeks away from completion!  Lord willing, they will have printed copies of the Mengen New Testament in their hands before Christmas!

In just under a week Becky’s translation helpers join her to begin four long weeks of translation checking. They have 2657 verses to get through.  (Matthew, John, Hebrews and Revelation.)

Please pray for the three Mengen men, that the Lord would be preparing their hearts for this long and intense month and for wives and children at home without them. One helper’s wife gave birth to a precious daughter last week. A huge answer to prayer. When she delivered her previous baby, she had terrible complications but this time around she seems to be doing fine.

Part of the translation check will be at Hoskins but for two and a half weeks they will be in the Highlands. It is a long way away for these guys and very scary to be in a different culture and in a location they are unfamiliar with. Pray that the Lord would calm their hearts and that as a team they would settle in and be able to do the translation check clearly.

After a very stressful week last week, Becky has been experiencing some fatigue and other minor symptoms that come with Multiple Sclerosis. Pray that she will rest this week and prepare herself mentally and physically for the days ahead especially that her eyesight would remain clear for all the reading and computer work.

Most importantly, pray that the Lord would help the Mengen helpers and the translation consultants, as they work together to see God’s Word communicated clearly into the Mengen language.

Thank you for your faithful prayers.