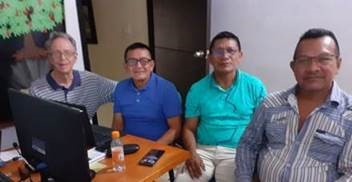 Larry and Sarah Richardson are back in their jungle location in Colombia. Praise the Lord they made it – although not without some difficulties. They were not able to ship their supplies as planned, but God provided via another means.

They were so thankful to God for a cloudy morning when they first arrived, which made it cooler than normal for this time of the year. (It is a huge change from the cool Andes Mountains where they had been for over a year, to the hot, humid, tropical climate.) Larry and Sarah also thank the Lord for a co-worker getting local help to clean their apartment before they arrived, so that they did not have to contend with the dust, mold and cobwebs, which had accumulated but there were still some plumbing and electric issues.

A highlight so far was when they went to church and met many people they had not seen for a year.  Later they had an opportunity with their adoptive family in the nearby village. They were able to share the Gospel with one fellow who married into the family during this last year. God is still at work and Larry and Sarah are excited to see it!

Recently all three Puinave co-translators have been ‘catching up’ with Larry and praying together. They enjoy being with one another again. Praise the Lord, their health has improved enough to resume working on the translation – although one of the men’s wife is still really struggling with her diabetes, leaving him only free to work half days for now. Please intercede for her.

Pray for Larry and Sarah as they adjust to life among the Puinave people in the jungles of Colombia. Thank the Lord that they both still enjoy good health.