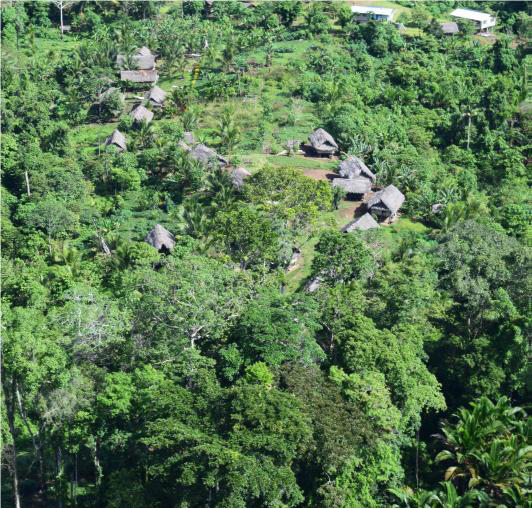 Most people were from other villages but there were also visitors from six different languages and dialects.
During the ceremony they also performed dramas and songs. They asked an educated village man who had studied in town (but who had not been in the literacy programme) to read a text written in their language. Everyone laughed when they saw how difficult it was for him to read! The language is so different to English or Pidgin, that he had to stop in the middle of the first sentence.
Then the students each read a text they had themselves written. One of the students had written about their desire to hear the truth and how the missionaries came to their village. He remembered each step leading up to their arrival in the village. It was very moving.

Now most of the students of the first class are teachers for the second class! They started last week with 18 other pupils. It is encouraging to that the people own this work. Aurélie and Nisae don’t teach anymore, but they still sit in the class to see how it is going.
They also have another session once a week with the students from class 1, in order to help them continue to make progress with reading and writing. If they want them to use their alphabet on a daily basis, they need to produce a lot of reading material, so Aurélie and co-worker Nisae want them to be able to write stories.
André recently went to visit an old man who was not feeling well. The man told him, “I am going to die soon. I am not here to ask you for medicine, I am here to ask you for the Word of God. I came to hear the Word of God; I want to hear it before I die.”
So the missionary team decided to start meeting with all the older people in the village and have started to teach them about God. The materials and Bible texts were read for the first lessons but for others they had to improvise (It will take some more months before they have all the lessons and Bible passages ready and start teaching the whole village).

André and Aurélie started teaching a group of eight people and then they went on break and their co-worker Jason did most of the teaching while they were away. André and Aurélie came back to the village a week ago, and one lady had a clear testimony of salvation. She was so happy, she told Aurélie, “Before hearing this story, I was in the darkness but now I know the truth.” Please continue to pray for these people as the team follow up with them. Pray they all come to faith.

André is back to translation and almost done with the set of Old Testament passages they want need for the teaching. The passages have been chosen according to the lessons the team want to teach when they start public meetings, probably in February next year. Once done with the Old Testament portions André will move on to the New Testament (hopefully in the coming weeks). Later on the team desires to translate the whole New Testament but this will take some years.

Thank you for praying for the Tousch family.