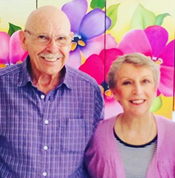 David and Chris Brown serve at the Bible school in Colombia. Just as quarantine was being announced Chris fell backwards from the high doorstep in front of their house. As she lay in the road praying, the Lord sent a couple who were out walking. What a blessing!

At the hospital (where they kindly examined her), the X-Ray showed a broken rib. What a blessing that nothing else was broken!

Another big blessing has been having family that live nearby. Also David cannot go to the college to teach the students (also in quarantine) but he can teach from their house using Zoom or Skype. Their son, who lives in the city with his family, keeps in touch via WhatsApp. He is teaching online three Bible study groups of 15-20 people during the week using David’s studies on Eschatology. How exciting and what a blessing!

Pray for a missionary couple that taught Bible subjects in another missionary college in Latin America for about 17 years and moved to Colombia in 2017, and became members of NTM Colombia in January. Recently as the husband was teaching a homiletics (preaching) class online, he felt very ill and was rushed to the hospital. He had three clogged arteries which had caused a heart attack. Not equipped to operate on such things they sent him and his wife to a very good hospital in the city. He stabilised, so the doctors decided not to operate immediately as his heart needed to recuperate beforehand. The surgery was performed succesfully yesterday, Wednesday (22nd). The next 24 hours are crucial. Pray that he will have renewed strength to continue in the Lord’s service and that more people will take an interest in their ministry.

Let us keep counting our blessings; and be wonderfully surprised at what the Lord does! Prayer Requests: