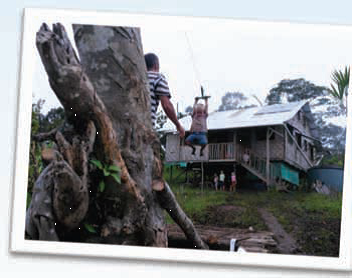 A week later, their other co-workers Maggie and Chris Hostetter were in the middle of their translation check with translation consultant Lisa Kappeler and some Pal folk when out of the blue the weather changed and a lightning bolt came crashing down on their veranda accompanied by a deafening crash of thunder. The force of the lightning threw Maggie and a Pal girl to the floor. Maggie’s whole body was shaking with cramps for quite some time, while Chris and some others tried to help by massaging her muscles. The team are so thankful that God spared her life and the life of the others. All who were there suffered from some kind of muscle pain the following days as well as ringing in the ears. This is now the second time lightening has hit one of the missionaries’ homes.
Over the last few months, God allowed a stormy season in Axel and Sandra’s personal life too. They were tired and felt tested in several areas. This was partly due to their long stay in the bush. God used this time to humble them once again and in February they went for a much needed break. It is recommended to have a break every four to five months. Now they know why! Back in Pal they feel refreshed and ready to go and tackle language and culture study again! Pray for Axel and Sandra’s marriage and family life, that they don’t lose sight of each other in the midst of language learning and all the “urgent” demands of life. Lilly had her first birthday in January and is weaned. She and Tom now share a room and they play together more and more. Sandra’s sister Miriam plans to visit them in May for about two weeks, and they are very much looking forward to that time together.
The Gospel of Mark has just been checked and so the team will now be able to print it off and hand it out to the literate Pal people. Chris and Maggie Hostetter are obviously gifted in the area of translation and love the work, too.
Literacy school is running and doing well. The students are eager to learn, and the new teachers are mostly doing a very good job. What is really encouraging is that some of the former students and some of the teachers now train their wives and older children at home! There is a real hunger and eagerness to be able to read and write. Some of the women have shown Sandra their writing and they are so proud of it!
The Pal people are now being taught through the book of Acts. Over the next couple weeks they will hear teaching on prayer, getting together as believers, baptism, the Lord’s Supper and other essential teaching on the Christian life. The sending and work of the Holy Spirit will be a big topic, too. The team expect that all those concepts will lead to lots of questions. Pray for Nate and Chris as they will need to do a lot of discipleship in the afternoons.
Pray for the Pal believers as they hear lots of new things, that the Holy Spirit will move their hearts so they will desire to apply the teaching to daily life and the life of the church.
The Claasens will fly out for their home assignment at the end of May, so that will leave the Hostetters and Axel and Sandra in Pal to continue with the work.