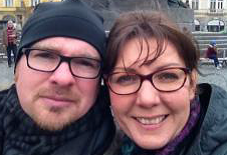 The Lord has presented Andrew and Nelli with an opportunity to serve Him in Australia. They have continued on in the process of getting a visa to work and live there. This process has turned out to be the most tedious and frustrating process they have been through so far. They were in the process of applying for a two year visa with the prospect that when the two years lapsed, they would transition to a permanent residency visa. However, due to very recent changes in the immigration laws, the chances of a transition from short term to permanent residency are not great. So, they were presented with a different visa route and have begun the application process for this visa with the prospect of immediately getting permanent residency.
Yet again they have to wait and see if it will be granted. During this time of waiting, other options have also been presented to them, which they are also praying about.
Please pray with Andrew and Nelli that the Lord would clearly confirm His will and plan for them so that they can continue with clear direction and purpose in the ministry the Lord has called them to.
Encouragement from Papua New Guinea
Andrew and Nelli recently had a surprise visitor; a pastor from Northern Ireland had been on a visit to Papua New Guinea for several weeks and he ended up visiting North Wahgi and stayed in the village where they previously worked. He shared with them that the highlight of his trip was to witness the impact that Andrew and Nelli and family had had on the lives of the Wahgi people he met with. As you can imagine, this news really warmed Andrew and Nelli’s hearts. Andrew’s two main translation helpers sent encouraging video messages and letters for Andrew and Nelli and they said that they now pray for Andrew and Nelli! Isn’t that amazing! God is at work in their hearts and they are now reaching their own people with the Gospel and being a blessing to Andrew and Nelli. Praise God for His work in their lives!
Andrew and Nelli give God all the Glory for the discipleship opportunities He has given them whilst in Northern Ireland too and they thank God for the privilege of serving Him.
Both Debi and Joshua had a great start this new school year. Debi is now in Year 9 and has started Spanish as her third foreign language! She enjoys it and loves her school and her school friends. Joshua is in Year 6 and enjoys it, but he’d rather be outside playing football with his mates. He’s also looking forward to starting Judo.