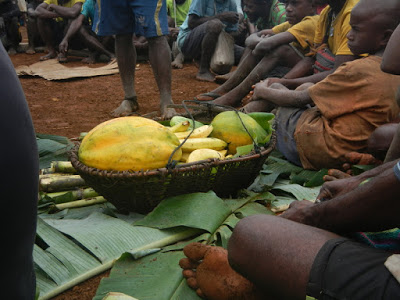 Steve and Gerdine Stanley with Oscar recently spent two weeks in the Pal tribe, which neighbours the Kovol tribe they will be moving into, and then the men on the team conducted a week long allocation survey in Kovol.

The Pal tribe have had NTM missionaries for the last ten years or so. The Gospel has been presented, a church has been established and currently the missionaries are teaching through the epistles whilst continuing with Bible translation.

This Pal church is the reason the Kovol people are requesting missionaries in the first place and so the team spent two weeks getting to know them.

They were able to ask the believers questions like “what was it like for you when missionaries first came?”, “what things did they do well and what if anything should we do differently?”

It also gave them two weeks living experience in the mountains. The weather was wetter than expected! They were able to look at their house plans again and make sure they have got a good way to wash the mud off before they enter the house!

The team sent a letter into Kovol ahead of them and four times during the two weeks they had visitors hike from Kovol to meet them. A four-hour journey over laden with food that they shared – a PNG act of welcome.

The men of the team spent seven days in Kovol territory visiting each of the seven Kovol villages. They had two main goals:

As they went village to village reiterating what their work will be about, the Kovol people were filled with excitement. The first village they visited sent a group of about six guys with them who hiked the whole way with them as their guides. People carried their rucksacks for them and fresh fruit was presented to them at every new village. The Kovol went out of their way to show them honour and hospitality, and every single village offered them both land to build on and trees to supply wood for building.

The team will return shortly having now nominated the village they would like to build their houses in. Another trip is in order to arrange things with the land owners and Kovol people as a whole ahead of the team building their houses.