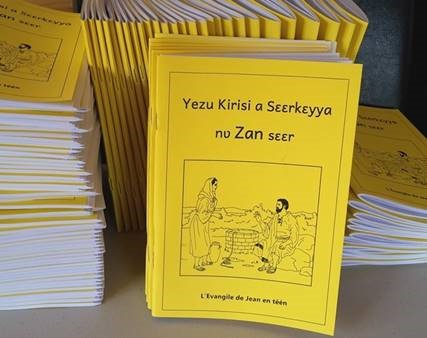 Like many of you, Paul and Marina Briggs have been taking advantage of the confinement to do all those little things around the house that have been put off for years as, they spend so much time in West Africa. Marina has been out painting all the fences, and various other things inside and outside their home in Northern Ireland. Their garden and hedge have never looked as well!

Thankfully, Paul is feeling a lot better after his time in hospital – not related to the virus. It took about a month to recover, and he is now on regular medication, so hopefully that will keep things at bay. They are thankful for your prayers.

In Ivory Coast the government is allowing groups of no more than 50 people to meet together, but the Loron believers have decided to keep the groups even smaller, at around 20, or so, and have been meeting for fellowship and teaching in various locations.

Last week Paul and Marina received some very sad news from the village. One of the young men who had been a Sunday school teacher for several years, passed away. He had been fixing the roof of his mother’s hut when he fell, and was badly injured. He was taken to two different hospitals, but they were not able to do anything for him, and he died. He was such a pleasant, hard working and unassuming young man, married with three small children, and will be sorely missed. Over the past seven years, he had been actively engaged in teaching the chronological Bible evangelism lessons to scores of Loron boys and girls in the village where Paul and Marina live when in Ivory Coast.

Paul and Marina are so thankful to have the room and equipment at their home to continue working on producing literacy materials and developing Bible commentaries for the Loron church. Marina is making up four more literacy sets, and a couple more weeks of work should see the commentary of Ephesians fully checked and ready for printing.

These are unusual times, but praise the Lord that His Word is still being preached and taught. Pastors and churches are discovering new ways to bring the Gospel to unbelievers and to encourage believers.