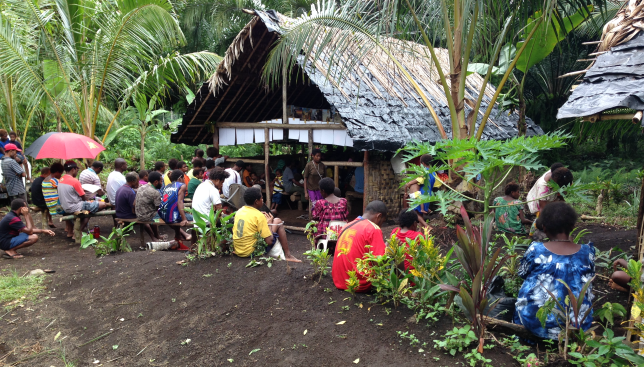 Unity amongst us as believers is important. It is something we as individual believers need to work on but also as churches too. With this idea of unity in mind Lourens had the opportunity to travel to a ‘neighbouring’ work and along with others was able to model how different churches can work together in unity. This time around they teamed up with three mature churches, the Mouk, Ata and Maleu churches.

They travelled by boat to a drop off point on the north coast of West New Britain. The boat ride was not too bad as it was only for two hours. After that they joined up with some of the Maleu elders for a two-hour truck ride into the village where they had their meetings.
At the village many of the believers gathered to greet them. It was overwhelming for Lourens to see so many believers gather in one village, as most churches NTM works with in PNG are not very large in number. A few hundred people gathered together to sing songs, and welcome them into the village. They had also prepared a lot of food which is a sign of their hospitality. Lourens stayed in the old house of a missionary that was built in about 1980. It’s a miracle that this house is still standing after so many years. Of course there is no electricity or running water, so they used the river as their bath and a nicely built outhouse for their toilet.

As usual they spent a lot of time visiting with the people, just building relationships, introducing themselves, sharing stories from their villages and churches and listening to their testimonies and stories. Lourens just loves hanging around with the people, not pushing any agenda and seeing what the conversations bring up. He had a great time with these mature churches, listening to testimonies of God’s grace and faithfulness from those who have been standing on their own feet for many years.

They also gathered for some meetings during the next few days. These meetings were focusing on the topic of how they can start working together better as mature churches and help each other in areas of need. They didn’t just speak about work but also about the heart! In other words, how can they encourage each other to walk with the Lord, and to remain faithful? These churches identified some areas of need, and will now be working together in helping each other in these areas. Unity is becoming a reality in this context.

On the last day they had a bit of a party with lots of food being shared. A good way of showing unity and friendship and appreciation within these cultures. Lourens was amazed and humbled to see how these people worked hard to feed everyone and it was really humbling when they gave each of them money to pay for their trip back home.

It was just a great opportunity for Lourens and others to come together as a team with different maturing churches and to see the body of Christ in action. Lourens was reminded yet again of how wonderful unity is!

Philippians 2:2 – “make my joy complete by being of the same mind, maintaining the same love, united in spirit, intent on one purpose.”