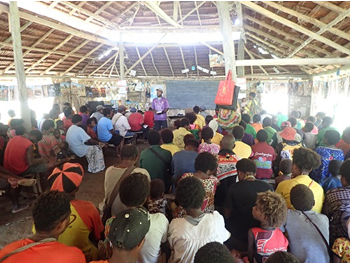 André and Aurélie Tousch serve among the Iski people of Papua New Guinea and their unexpected departure was a shock to the church.

Two weeks ago on returning from visiting another Iski village taking several hours of walking and canoeing, André felt very sick. In order to finish the journey home, his Iski friends had to support him as he was unable to walk and had difficulty breathing. After a few days without real improvement, the doctor at the mission centre decided to evacuate André. The helicopter picked up the whole family and dropped them off at the mission centre. After a few days at the clinic there, André was transferred to a hospital in the capital, Port Moresby, while the rest of the family remained at the centre. André has been discharged from the hospital and is now able to eat but he is still weak. He is still in Port Moresby, waiting for follow-up consultations. Ministry is on hold until André recovers. Please pray for this situation.

They are grateful for the logistical and medical support by NTM PNG and  SIM France who monitored the situation closely.

André and Aurélie’s colleagues the Callahans have definitively left the village; the church suddenly finds itself without missionaries. There is no telephone in the village so they are without communication with the church. Pray that this will be an opportunity for the church to grow in their dependence on the Lord.

On a more positive note, the village André was returning from when he became sick was where there had been an outreach at the end of 2019 , and many people had joined that group of believers. André and Aurélie’s colleagues were able to visit the young church in early 2020, but since then it had been isolated. For almost a year, the church had not received a visit from missionaries. But the Lord is building His church, with or without missionaries! What André saw during his visit simply amazed him. It is hard to be a Christian there as they live among people who are not interested in Jesus, make fun of, slander and harm them. However this is their reaction “We are trying to show the love of Jesus, to do good to those who hate us.” As a result, more than 60 people recently asked the church there to teach them through the story of Jesus. The church has started Bible teaching meetings with these 60 people! What an encouragement.

Most Christians have received little Biblical teaching: they have heard the story of Jesus, told chronologically from Genesis to Revelation, focusing on the coming of Jesus and His sacrifice for our salvation. It is this love of Jesus that motivates and inspires the church there today, a church that is thriving in the midst of opposition.

André was able to help them organise themselves and give advice for evangelistic meetings, and also to continue teaching young believers, on topics such as communion. Only three believers there had received training in order to be Bible teachers; a fourth began to help them in the missionaries’ absence, and thirteen others were waiting for André to visit to formally express their wish to engage in the work of evangelisation. It is very encouraging that these men are on fire for the Lord in spite of the difficult circumstances.

Literacy also continued and more people are reading the Scriptures in their language, fluently, with joy! The Iski believers shared the Gospel with them and taught them to read in their language not the missionaries!