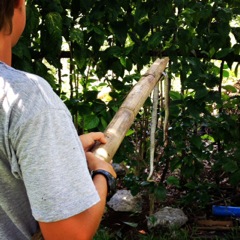 Donovan Epp sat under the house, working on the next Bible lesson, just like any other day, when he looked up from his computer and saw a cobra, only five feet away. “ULAG!” (“SNAKE!”) The guys turned around and jumped into action. One language helper grabbed a piece of bamboo and attempted several death blows to the snake but could not kill it. The snake turned back several times, trying to strike with its neck flared. The man then caught his head with the bamboo and held it in place while Donovan heaved heavy rocks onto its head; they managed to kill this wandering snake. It was one of the most deadly snakes in their area, and only the first time Donovan had seen it in the village.

After the incident they went back to their lesson; the Israelites wandering through the desert, and in their faithlessness and murmuring against God, He sent poisonous snakes as punishment! God has His own illustrations in mind for this lesson! As the story continues though; God graciously saved the Israelites in their punishment and had Moses make a bronze snake and put it on a pole. Whoever had been bitten with a poisonous snake just needed to look to the snake to be cured and escape death. Pray that the Agta people will soon look to Christ only for their salvation. Working through Old Testament stories with his language helpers is helping Donovan build a foundation of who God is, who man is, who Satan is, and God’s work to restore the relationship between man and God. Pray the approach of building on firm foundations will prove to build a deep rooted faith in Christ alone for salvation and weed out syncretism.

As Donovan entered the story of Jericho he wondered what this lesson might bring!
The missionary team among the Agta sense an intense spiritual battle is going on at the moment, this last month has brought unreal opposition and distractions. Pray for strength and wisdom as they continue to show the people the love of Christ and translate God’s Word.