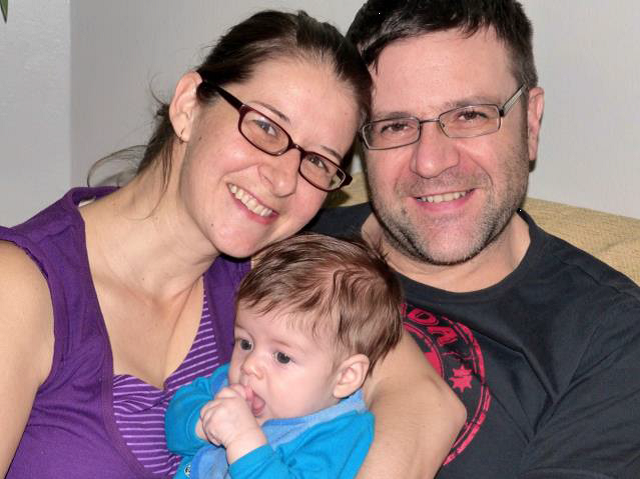 Alessandro and Chantal’s big project was checking the Bible lessons for the Konyagi people. They spent four intense weeks in April/May working on that. During that time they saw God at work in many ways and, despite numerous obstacles (their Konyagi helpers not arriving as planned, the health of Chantal’s mum, Chantal’s hospitalisation, the fatigue of the entire team), they were able to check all of the lessons! They praise God for this was truly a miracle. Alessandro and Chantal were greatly blessed by the help of Chantal’s parents. Without them, it wouldn’t have been possible to accomplish this project, and their help was even more precious when Chantal was hospitalised and they took care of Samuel as well. They were also blessed by the help of many of the missionaries in Dakar – with meals, the care of Samuel, etc. Alessandro and Chantal praise God for all He has done and have been blessed by those who prayed for them and for many who contributed financially to this project.
The Bible teacher is now back in the village with these lessons in hand and is teaching them to the villagers. Pray for him. During the weeks of checking the lessons, the team had the impression of constantly being under the attack of the enemy and they know that he will not give up easily; for he knows how powerful God’s truth is to transform lives. Pray for the Bible teacher and his family, for their spiritual growth and that God might provide for their needs. Pray that the people will come to listen to the teaching and that the truth will have a great impact on their lives.
Pray for Alessandro and Chantal’s other Konyagi helper as, although he understands a lot, he still seems to be placing part of his trust in his good works. Pray that he may realise that there is absolutely nothing he can do to save himself, but that it’s only through faith in Christ’s sacrifice that he can be saved.
Alessandro and Chantal’s last days in Senegal were difficult. Despite their great joy to see the lessons completed, they were all completely exhausted and Chantal was still in the hospital. On the advice of the doctor, they made the decision to return directly to Canada instead of going to Italy as planned. Making new travel arrangements was a huge challenge! They thank God that they were able to travel with Chantal’s parents and, a month ago, they arrived in Canada safe and sound.
Chantal’s health has improved. They still don’t know exactly what the cause of her illness was. She felt better after anti-parasite and antibiotic treatments. She is still very tired and rather weak, but she is slowly making some progress. The baby is doing well and they are happy to announce that they’re expecting a little girl! At the moment, they are living with Chantal’s parents. They are thankful to be with family and to have help. They also have lots of paperwork to deal with now that they’re settling back into Canada, especially with Alessandro being a new resident. Samuel, who is now 19 months old, has adjusted pretty well to all the changes.
Alessandro and Chantal rejoice to see how God has been providing for their various needs. They plan to move into their own apartment in September, just a few weeks before the arrival of the little one. They don’t know what the future holds, but, for the moment, they plan to stay in Canada until the arrival of the baby and for a few months after that. Then, they’re thinking of spending a few months in Italy to visit family and their churches there before returning to West Africa.