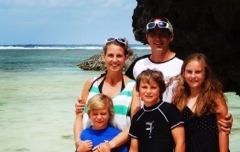 His language helpers showed up at their usual time, one before 7:45, and the other at 8:30. Don was already in the office, working on an email and getting something ordered from NTM staff in Manila (which could be in the village in a couple of weeks or so).
He read through a lesson to his language helpers, a lesson which they had already worked through with him for a week. This time though, the lesson was from beginning to end; checking for continuity, flow, and if it was understood. Don read quite loud (so his deaf language helper could hear), and asked if there were any words, grammar, or illustrations that did not make sense. He asked that they would interrupt if changes were required. Then, if they came up with a better illustration on the spot while he was reading, that they would say it right away and they could talk through it. Don’s office has all kinds of bows and arrow, fishing spears, eel spears, fish hooks, nylon, rubber bands, etc. It is like an Agta ‘man cave’. In such a setting, if there was an illustration from the Agta culture, the objects are close at hand for them to grab and use.

The lesson they worked on was the spirits lesson, calling out the evil spirits that people have worshiped for years. They worked through how the evil spirits deceive and lie and about the fact that the spirits scare them, getting them to follow them, and eventually lead them to the second death, separate from God. As they worked through the example of the Agta hiding from the spirits when their children are born, Don explained how the spirits scared them and so they hid in a smoke house so the evil spirits would not see or smell the new baby. But the fact is that the babies’ first breath is full of smoke, which causes many respiratory problems in the early months of life, causing their babies to get sick and in many cases die. One of the language helpers has lost more children than he has living at the moment!
He remained wide eyed for the rest of the 30 minutes until the session was over!
The lessons are starting to make sense, and it is hard for Don to see his friends work through the weight of the lies that Satan has told this people, causing much death!
Pray for clarity in the lesson prep and for Don’s language helpers to be alert and absorb the TRUTH! Knowing how sinful and separate we are from God is hard to hear, BUT must be heard in order for them to know the saviour, Jesus CHRIST!
The illustration that the missionary team will use for Satan deceiving us is a ‘batek’ (spear for eel). This spear has a barbed end with a string attached to it so when an eel is speared, it will not come off! The string ensures the catch is not lost! Pray that the illustrations will be effective and understood by the people! The illustrations have come from my Agta language helpers, which allow them to explain the truth to others, and also give them ownership of the lessons.
Praise God for the progress, and for the encouragement to keep moving forward! The missionary team know they are in a spiritual battle; it has been on for years, and they know it will become much greater as they bring truth! Pray that they would remain safe, not be distracted and keep pushing forward in this time of battle! We know who wins!