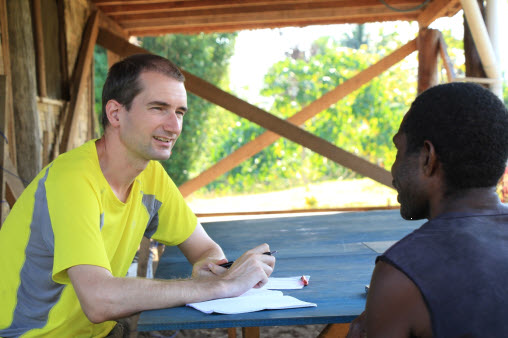 In November they will be going to Madang again for a Bible translation workshop. On that occasion they will go with two villagers, who will also be taught translation principles by Papuan believers (using the trade language).
In the meantime, André and Aurélie are still working on improving their language fluency and also writing linguistic and culture papers. This month they’ve been working on the phonology and they are about to put together the alphabet. It is an important milestone and it is encouraging for André and Aurélie to have reached it. Firstly they will come up with a trial alphabet, and then they will try it with some people who are Pidgin literate. They will see how easy it is for them to use the new alphabet and if anything needs changing. Once the alphabet is satisfactory, André and Aurélie will be ready to start literacy hopefully at the beginning of next year.
Recently the children have been very sick. Praise the Lord they are doing better now as they almost had to evacuate Nathanael because he was dehydrated and could not eat. He eventually improved and now he’s almost back to normal.
Please pray for the people. There are a lot of tensions and arguments at the moment and some of them say they want to leave the village. It is hard for André and Aurélie not to take sides in the arguments, they still have good relationships with all the people in the village and they want each of them to hear the Gospel. Moreover, the people think that disputes are one of the causes of sickness and death. They think that when people are angry it has the power to make other people sick. When André and Aurélie’s children were sick they mentioned it was because there was no harmony in the village. Pray for these people as they need the light of Jesus in every area of their lives!