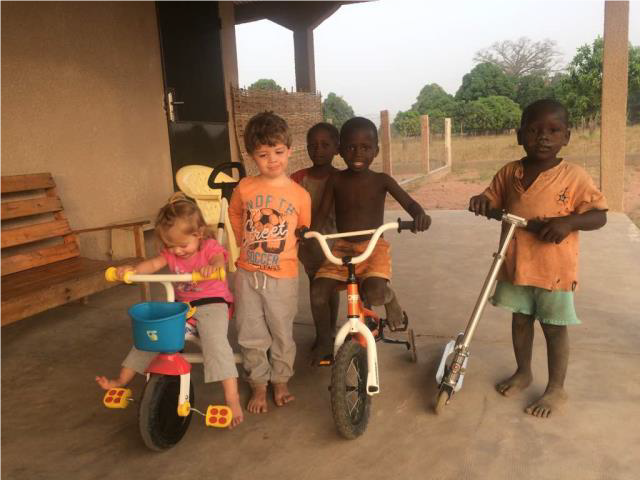 Alessandro and Chantal celebrated Christmas in the village with their co-workers. New Year began with them all having sickness for a few weeks.

They hosted a team that came from Italy to learn more about missions. It was a joy for Alessandro and Chantal to spend time with them and to see their enthusiasm. They also had a language consultant visit.

Already this year they have had an unplanned trip to Dakar which allowed them to pick up Chantal’s parents who have joined them in the village to help them for five months. They did a big clean up of their co-workers’ empty house so that Chantal’s parents could live there.

A few weeks ago, their routine changed. Now, every morning, Chantal’s parents fetch their kids over to their place. The kids have fun making crafts, learning their letters and playing. They love their time with Grandpapa and Grandmaman who are a real blessing. While the children are having fun, Alessandro and Chantal are having their language sessions. They have now begun phase 4 of the programme they are following. This new phase is pushing the limits of their understanding and conversation so that they can progress further. It is not easy for them! Sometimes they are frustrated and discouraged. Pray that the people will be willing to tell them their life stories; they are generally reluctant to do so but it would really help Alessandro and Chantal in learning the language. Pray that their helpers would be faithful to attend the planned sessions and have a genuine desire to help them. Pray for perseverance and that Alessandro and Chantal can progress to the point of being able to communicate well in this language.

Pray for their co-workers who are working on translating portions of the Old Testament and preparing Bible lessons to start the Bible teaching. It is a huge job! It is not a simple task, as the truths of the Bible must be communicated in such a way that they will be well understood in a culture that has its own beliefs and preconceived ideas.

Thank you for partnering with Alessandro and Chantal in prayer!