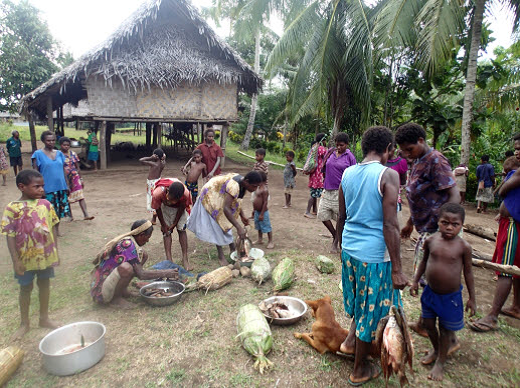 Two men from their language group were attending the workshop with them. They worked on Genesis chapter 37. The translation has to come from the mouth of native speakers, so that it is natural. At the same time, no information can be added to or taken from the original text. So André and Aurélie have to work on the text, record a native speaker repeating the text and then transcribe it. Then André and Aurélie check the content and make corrections if needed. Then they need to make several comprehension checks to make sure the people understand what is written; making corrections until the text is clear and understandable. Another step is to translate the final text back to English so that a consultant can check that no meaning has been lost in the translation. André and Aurélie were very encouraged and are planning to start translating the Bible next year.
While the Touschs were in Madang a little child from their village suddenly fell and had convulsions. His parents took him to André and Aurélie co-workers the Callahans who contacted the doctor.
The doctor said the child needed to be evacuated to a hospital as soon as possible. But it was afternoon and already too late to call a helicopter in, as they cannot fly at night. The doctor said that the child might not survive until the next day. But the next morning the child was still alive, though still unconscious. The child was taken via helicopter to NTM’s Madang centre, from where André and Aurélie could drive him to the hospital. He received good care in the hospital and woke up the next day, but André and Aurélie were still concerned for a while because he was very weak. However, he has now completely recovered, he plays and laughs and is back to normal, praise the Lord!
In their last prayer update André and Aurélie were concerned about the drought that was going on in PNG. The rain has continued since then, the ground has softened again and the people can plant food. Sadly, much of their crops have died during the drought. So the missionaries flew in a full helicopter of rice for the village community.
At the end of the year, André and Aurélie again see the faithfulness of God. The missionary team are in the village in PNG to do His work and He is building His church. André and Aurélie are thankful for your prayers. They could not do this work without you!