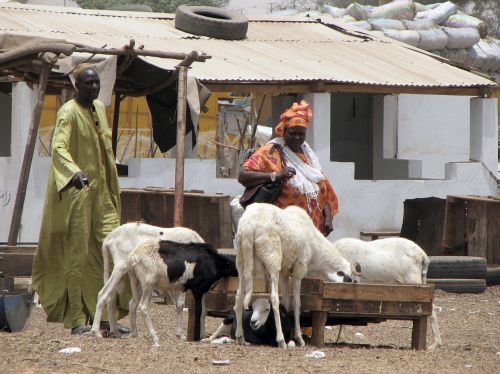 Although her time in the village was very busy Liv was able to get some rest and enjoyed being able to sleep on her water bed again. The rainy season has been good this year and the fields have done very well which is a blessing. But unfortunately there has also been a lot of sickness among the people. During the time she was in the village seven children died. Although they were taken to the hospital several times and received good treatment it did not help. It is always difficult when children die but unfortunately this is very much part of everyday life among the people in Senegal. There are very few that have not experienced losing a child.
The work on the book of Acts also went well. It is now printed and will soon be distributed. Pray that it will be a blessing to those that read it. Liv is very excited about the people having more Scripture to read. Liv finds making the rough draft the most difficult part of the translation process. She was able to go through some chapters of the rough draft of Romans with her language helper which she really enjoyed. It took a long time, but it was so exciting for Liv to see what he did and didn’t understand and then to make the necessary changes so that it flowed and was understandable. Her co-worker told her that one of the believers that helps him with the Bible lessons had read the rough draft of Romans that had been translated. The man knew French well and had tried to read Romans in his French Bible but had not understood it and did not get much out of it. But when he read it in his own language he said he understood everything. That was such an encouragement to Liv especially since Romans is very difficult to translate and it is going very slowly.
Pray for Liv’s co-worker who will now need to prepare Bible lessons for the book of Romans.
While Liv was in Senegal her mother was in respite care. The first week was very difficult for her and she was extremely restless. Liv is very grateful that after that it went well. It has now come to the point where Liv is unable to take care of her mum at home but unfortunately there is no permanent place available at the care home at the moment. Please pray that a place will become available soon.
Please continue to pray for the believers in the area in Senegal where Liv works and that the Bible teaching that will continue next week year.