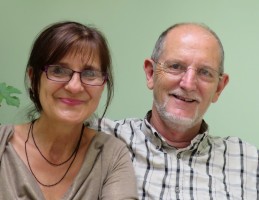 Daniel and Elizabeth Moore, who have taken over many of Steve and Moira’s responsibilities at the college, are now settled into their apartment on campus and have moved into their old office. Steve and Moira have been helping them get settled in and will continue to be available to help as needed until the time of their departure in January.

Steve and Moira have already bought their plane tickets and are due to fly to Senegal at the end of January, 2016. Between now and then they are doing all they can to prepare for their transition to life there. They are listening to French radio and French sermons and studying the Baynunk language material. Thankfully they have thirteen hours of Baynunk language on cassette tapes which they have been digitising and typing onto the computer. They are thankful for the way the languages seem to be coming back to them and although they can understand 99.9% of what they hear, they still need to work on it so it rolls off their tongues. Their aim is to get their Baynunk and French up to a decent level before returning to Senegal.

Initially Steve and Moira plan to spend a few months in Ziguinchor, the regional capital of the Casamance, before moving into the Baynunk village. This was requested by the field leadership team and is mainly to make contact with evangelical churches in Ziguinchor, and encourage Senegalese believers to pray for and partner with them in reaching the Baynunk people. They will continue their Baynunk study and make as many contacts as possible with the Baynunk who live in Ziguinchor. They will only be a 30 minute drive from the village that they used to live in, so they are hoping to make frequent trips there before they eventually move into one of the empty missionary houses.

Pray that the Lord would touch and prepare the hearts of the Baynunk people for His Word. Without Him Steve and Moira realise they can do nothing. How they present their purpose in the village in a situation increasingly affected by the dominant religion is also something for which they need much wisdom and prayer.

Steve and Moira have been overwhelmed by the love and support that they have received from so many as they prepare to go back to Senegal and the Baynunk people and thank you for all your prayers.