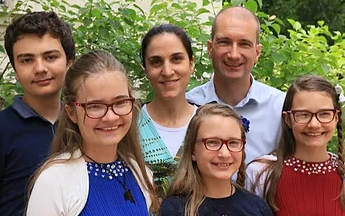 The three weeks before their departure were spent checking the translation of several portions of the New Testament. This process took place in town, at the missionary centre, with the help of a consultant and several Iski friends and they were able to be with them at the airport to say goodbye. Eighty percent of the New Testament has now been translated into the Iski language. Thank you for your prayers for this project! André and co-worker Jason, continue to work on the translation. For André the following books still need to be finished: Colossians, Philemon, Philippians, and 2 Corinthians.

For several months, André and Aurélie had been wondering about their future ministry once they returned to France. At the same time, their sending mission, SIM France-Belgium, which was looking for a new director, approached them. The Lord led the way and André was appointed director of SIM France-Belgium. André will lead the SIM team located in Caderousse in the south of France. They plan to move to the south of France during the summer.

André will begin the role of part-time director in September, while continuing the work of translating the New Testament into the Iski language from France. Thanks to a satellite communication system installed in the village, they can communicate with our Iski friends through the internet. The work of translation can thus continue in spite of the distance. Finally, André will continue to make visits to PNG to support the young Iski church.

Continue to pray for the Iski believers, for the two local churches.

André is still a full time missionary with SIM. Pray that the Lord meets their needs as they relocate, especially as they look for a place to live. They have moved around a lot in the last few years, and are looking for more stability. Pray for them during this difficult transition period. The children really enjoyed themselves in PNG and were sad to return to France. They will have to adapt to public schools in France (college and high school) and to a new area of France.

Thank you to everyone for your prayers that are so precious to them.