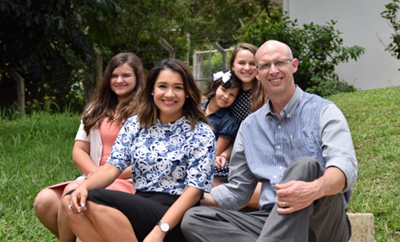 The Lord has given Stephen and Helena and family a great time together with other family members in the UK! They have enjoyed catching up with their friends and family and making new friends. It has been lovely for them to be part of the church in London. Ashley and Amy were baptised on the 8th of January! The Lord has given them great friends in the UK. They are sad to be leaving them soon!

Stephen was able to attend a leadership forum in Southeast Asia which was a great success! There were 170 people from 28 countries. It was encouraging to see the many opportunities that God is opening up to train church planters and plant churches in countries where New Tribes Mission hasn’t gone before. A missionary couple, who promote transcultural church planting in the churches of Italy, want Stephen and Helena to help them encourage Italian missionary candidates to train in Colombia! It is easier for Italians to learn Spanish, than English.
Seeing the bondage and spiritual darkness in the people in Southeast Asia, challenged him once again with the urgency of spreading the Gospel.

Stephen and Helena and family plan to fly to the USA later this month and will spend the first week and a half visiting in New York and Pennsylvania before beginning the drive down to Texas. They plan on being in Texas for three months, then visiting friends in south-eastern USA, before spending the last two months in Pennsylvania and New York. And the first week of July they would like to fly back Colombia.

Praise the Lord that He has provided them with a van for the time they are in the USA!

On the 3rd of December three students graduated from the Transcultural Missions course in Colombia and fifteen graduated from the Bible course. Nine of the Bible course graduates would like to continue on with the Transcultural Missions Course this year. Please pray for a good group of new students for next term. Pray for the staff as they decide who should be accepted as candidates and how to fit everyone in.

May your joy be great as you consider what God has done in these young people. You have played a part through prayer. One of the students only came to study the Word, not to be a missionary; but God convinced her to stay, and in her fourth term showed her that He could use her in tribal missions. She and her husband will serve on the college staff this year!