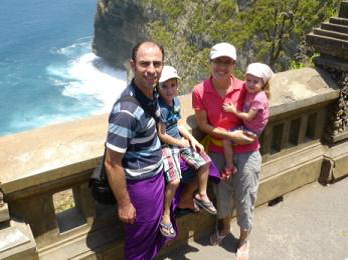 People that depend on their gardens for food had a real problem. Samuel and Judith heard of places where drinking water was getting short and contaminated. Many of the students at the training centre would go to the forest after classes to get green leaves for their lunch. To all these people the verse from Matthew 6:31 “So do not worry, saying, ‘What shall we eat?’ or ‘What shall we drink?’ … your heavenly Father knows that you need (this).” took on a whole new and very literal meaning. They were really worried about what they were going to eat and drink. No matter what we are worried about – food, drink, or other things – God wants us to trust him. He will take good care of us. This is something Samuel and Judith want to learn again and they want to focus more on Him than on other things.
January to March last year the students of the missions course did their nine-week practicum on another island among a different language group. Samuel, as their teacher, accompanied them for the first three weeks and helped them to get started. Later they flew in as a family since Samuel had to check on how they were getting on. It was a great experience for them all to visit a tribal location where NTM has been working for years.
Shortly after that Samuel hurt his back while playing volley ball and had to spend a few days in hospital. They are so grateful that they could get all the medical help Samuel needed within the country.
Eight students graduated in May. Samuel and Judith are always encouraged to see students finish their four-years of training. Some of them are now back helping their home churches and some of them took on a new ministry in a new location.
Student numbers are up this academic year. Classes are bigger now except for Samuel’s. He only has three students. Since he is training two new teachers to take over his teaching role when they go on home assignment later this year, it is actually helpful not having a big class.
With Samuel taking over the responsibility of teaching the second year of the missions course (mostly linguistic subjects) and Judith taking over the role as book keeper, their friend and co-worker was free to go and join a tribal team. They were very sorry to see a good friend leave but also excited that they could free her up to go and follow her heart’s desire.
Ever since living on campus (they moved houses in June) life has been a bit easier. They don’t have to go back and forth every day and the children have lots of friends around them. Joel still enjoys going to child care every morning and usually spends the afternoon playing outside with his friends. It’s hard to keep him busy inside the house. Hannah’s health improved and she is doing much better in regards to her asthma. Before Christmas she started going to child care every day too and loves going there.
After studying for three terms the Bible school students have just started a six-month practicum in their home. Besides that, one co-worker family is leaving for a longer home assignment to settle their children back in their home country. Also, two new families have arrived who want to finish their national culture and language study in the region. Samuel and Judith will be responsible to help and coach them through the process. In addition to this they are planning and preparing the next nine-week practicum that will start this month.
Samuel and Judith covet your prayers especially when they feel a bit overwhelmed at times with all the things that are going on. Pray that they will have wisdom to get their priorities right and that they will depend on the Lord for what He has for them.