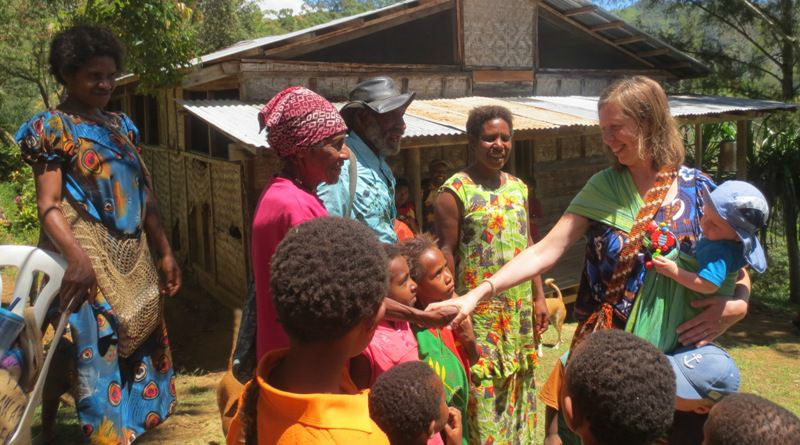 This time last year Gerolf and Mailis were just about to leave for Germany! What a year it was; lots of travelling, spending time with their family members, meeting old and new friends, sharing about God’s work among the Dom in Papua New Guinea and taking some time for much needed rest.
The highlight was the birth of their little Christian who is now a happy nine months old baby who loves to explore and learn new things! His three years older brother Richard, loves playing with his village friends and often tells his parents that; “It is cool to live here!” Please pray for Gerolf and Mailis as they raise their kids in a different culture and for them to develop well and to come to know the Lord at a young age!
Gerolf is again fully immersed in the Dom culture and language study and has already made progress. He can communicate with people to a certain level, but there is still a long way to go to reach fluency in the language and good understanding of the way the Dom people think and act. Please keep praying for strong motivation and good progress!
Mailis is busy with taking care of the family and house and doing different things in the background. She desires to spend time with the village ladies and she tries to visit different ladies a few times every week.
As a family they visit one of the local families each week. Gerolf and Mailis take some store bought food with them and the family adds their garden food, they cook and eat together. It is a good way to get to know people better, build up relationships and learn first-hand about the Dom culture. Please pray that they’d be able to build up meaningful relationships with their friends and neighbours.
The preliminary copies of the Dom New Testament were printed in 2015 and given into the hands of the believers last July. The official dedication of the New Testament will take place this August. The Dom churches are preparing for it together and making plans. It is a historical event that probably will be attended by many people from the whole Dom tribe. It has been encouraging for the missionaries to see how excited the believers are to read the New Testament in their own language and how much better they understand it (compared to reading it in Pidgin English). Please pray for unity in getting ready for the dedication and for a day that glorifies God!
There are encouraging things happening in all of the four places where people meet regularly to hear the Word of God. In the village where Gerolf and Mailis live, two guys continue to teach on Sundays and are becoming more experienced. Also two believers regularly go out to the two other villages where the Gospel has already been preached and new believers need to continue to hear the teaching. Very soon a new outreach will start not too far from them, but it is in another language group that is very similar to the Dom language. Four teachers from the two older churches are planning to be there for a whole week and teach every day from creation to the resurrection of Christ. A couple of new believers who might become teachers will join them for support and training. Please pray for this outreach; for those who hear the Word of God and for the present and future teachers!
Gerolf and Mailis’s co-worker Judy just finished a literacy course. The usual pattern is that initially many people are excited to learn to read and write in their own language, but as time goes on they drop off one by one. That was the case this time as well, but there were a few that went through the whole four months course. Besides becoming literate in the Dom language they also learnt to read and write in Pidgin English, which is PNG’s trade language. Please pray for Judy as she plans the next course to start in June.
Since Jim and Judy arrived back from home assignment last October Judy has resumed the weekly ladies’ meeting and Jim started an Old Testament Bible study that takes place twice a week. The fact that all of those meetings are well attended is very encouraging. Pray that the believers won’t just be hearers, but doers of the Word.
There are lots of kids and teens in the village church and as a team they are praying and thinking about how to teach them, so that the younger generation could grow up knowing the Lord. Instead of the missionaries doing it all they would love to see some (young) adults getting concerned for them and showing interest in kids’ and youth work. Please pray that the Lord would raise up some teachers/leaders for teaching the young generation!