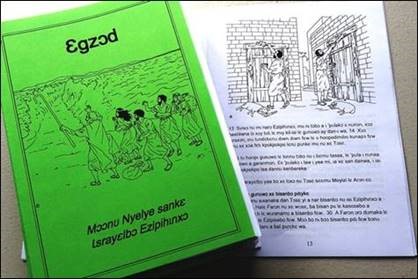 This trip back to West Africa will last around ten weeks. They are trusting the Lord that they will be a help and a blessing to the Loron believers during their time with them. Paul and Marina count it a privilege to still be involved in sharing the greatest message on earth among needy people.

Over the next couple of months a number of important events will be taking place in the work and Paul and Marina would appreciate your prayers.

In September Paul is planning to return to Burkina Faso to participate in a two-week Bible translation workshop on the book of Revelation. Two Loron Bible translators will also be travelling from Ivory Coast for the course. Pray that they will have a profitable time as they take part in the workshop and translate more of God’s Word for the Loron believers.

Marina will join Paul in Burkina towards the end of September and once they get visas to enter Ivory Coast they will travel to their village to resume Bible teaching and literacy in various Loron centres of population.

In early October a team of three or four NTM missionaries will travel from Senegal to Ivory Coast to give some special training to a group of about twelve Loron church leaders. This training will include material being taught to prospective West African missionary candidates.

Paul and Marina would love to see the Lord raise up some of the Loron believers to become involved in cross-cultural ministry in West Africa.

The Loron believers have been praying for years for an opening to bring the good news of the Gospel of Christ to a certain nearby village, but the leaders there have been resistant to the teaching of God’s Word, and have hindered any attempt by the Loron church to engage in evangelism.

Recently, however, there has been a change in the attitudes of the village leaders and a few believers were able to visit the village to begin Bible teaching. Please pray that the door will remain open so that many Loron people in the village will come to a clear understanding of their need of a Saviour, and will put their trust in the Lord Jesus Christ.

Paul and Marina are thankful for the time that they have been able to spend with their family in Northern Ireland and they ask you to continue to pray for their parents. They have had various ailments and setbacks over recent months, but thankfully nothing too serious.

During their time at home Paul and Marina were able to print several hundred Scripture booklets (Matthew, Luke and portions of Exodus), and a number of sets of Bible lessons for the Loron Bible teachers. They have enjoyed using their new office and printing equipment.