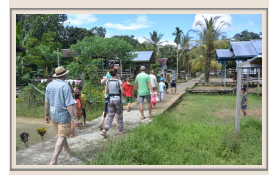 The Apostle Paul knew that it was worth the effort to invest in the lives of people. There are so many things that we can invest our time, our effort or our money in—but what will be the end result, if we, as is oftentimes is the case, invest in minor things and not in those things that are truly important? From an eternal perspective, there is little of true importance in this world! For Tony and Lina Keller having a part in seeing people come to faith through the Gospel and knowing that they will spend eternity with them in heaven—there is no investment that is more worthwhile nor a joy that is more overflowing!

This year so far The Keller family have had several visitors to their home in Asia-Pacific. It is so special for them when people visit and experience first-hand what it means to live there and are able to picture things in their minds. Even though saying good-bye is tough, they truly enjoy receiving visitors.

In Mid-February Tony and Lina’s co-workers moved into a small house that they were able to rent in the Buk tribe. During their first five weeks, they were able to get a fairly good idea of what life in the tribe is all about as far as the people, the surroundings, the language and other things are concerned (knowing that five weeks are not enough!). They were able to pinpoint some land to put their houses on and have been able to purchase building lots.  It truly was a dream come true. For many decades, people had been praying for this tribe. For many decades, the tribe had declined to have anybody know the language and culture. Nevertheless, for a little more than three years, this tribe has warmed up to the idea of other people getting to know their language and their culture.

The missionary team’s plan is to continually invest in relationships with the people of the Buk tribe in order to get to know them, especially to learn from them and in due time to start building their homes.

At the end of April Tony and Lina started stage 4 language and culture study – their last stage before the big evaluation! At stage 3 Tony is at capable mid, and Lina is at capable low. Therefore, they both need to jump one more (big) step. They hope to finish national language study by November this year! At the beginning of July, they will need to travel to a nearby country for a couple of days in order to renew Tony´s passport and to vaccinate their youngest child.

Over the last four months, Tony and Lina have been kept really busy. Please pray for them that they learn to live in the present and that they enjoy living in Asia-Pacific. There are those moments of frustration, but also those moments of intense laughter! They want their children to feel at home in Asia-Pacific, but they also would like them to feel that way about Germany too, after all that is their home country. Please pray for them to have daily strength and wisdom in parenting.