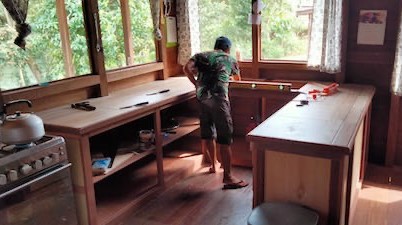 Tony and Lina with Levin, Chloé, Lias and Nora testify to the fact that the Lord is with them. He is the One who is able. He carries them through any situation. He is their ever present help in time of need. He loves to listen to their prayers and He loves to answer them as well. They are witnesses to this fact as the past months have shown.

Once Tony, Lina and family moved to their current home among the Bucket people of Asia-Pacific in April 2020, they did not think it would take another year until they had a kitchen. A team from their home church in Germany planned to visit and to build the kitchen and do some other projects round the house. Due to Covid-19 it had to be postponed three times. In the end, the decision was made that it would just not be possible to have people from Germany to visit, which was disappointing. The kitchen, solar panels, cupboards, shelves in the classroom etc., were missing. Tony had to build some things himself; otherwise, it would have been too laborious. Nevertheless building a kitchen themselves was not really their first choice. Tony says, “I work fast but I‘m not that accurate.” Therefore they decided to call the craftsmen (who had built their house), and ask them if they could help them out for a week. They had no idea if they had ever built a kitchen before or how it would turn out in the end. It was more important to them to have a functioning kitchen, than to have a kitchen that looks like one from a stylish design magazine. After buying and transporting all the materials needed, they were able to start building in March. The week of working went better than they had planned and they were able to complete everything without having severe problems. Even their co-workers were able to hand their unfinished projects over to the craftsmen, who stayed until all of the work was finished. They once again experienced how God provides!

At the end of May, Tony and Lina had their second language exam. At the same time, the leadership paid them a visit. They are grateful that the language teachers and the leaders took the time to encourage them; helping them to evaluate and enhance their language and cultural studies. Those visits are a tremendous help. They have made a gigantic leap forward in their language studies The cultural studies are very complex and Tony and Lina hope to enhance their knowledge in that area during the upcoming months and even years.

In June, they said goodbye to their school helpers who returned to Germany. Since everybody gave their best effort, Chloe was able to finish kindergarten and Levin finished 2nd grade, both did a tremendous job.

As a family they have recently spent time in the nearest little city for a little break, supply buying and time to skype with family!

Pray for the missionary team as they prepare for when they are able to present the Gospel to the Bucket people.