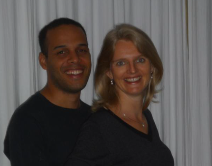 Fernando and Tabitha arrived in the Netherlands on the 12th of December and felt relieved to be close to good medical care as the birth of their baby approaches. The baby is due around the 13th of February. They are thankful that so far all is going well. Unfortunately Fernando was not granted an extended visa, and so he will need to leave the Netherlands and spend some time in the UK from the 5th until the 21st of January. They plan to leave for Brazil on the 26th of March before, Lord willing, returning to Mozambique sometime in the middle of 2015. They would value your prayers in all the upcoming changes (pregnancy, birth) and travel plans.