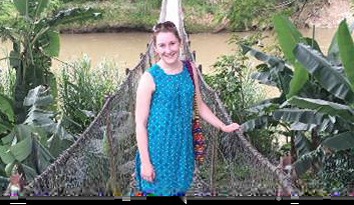 For a whole week, the elementary and high school students participated in ‘Teacher Appreciation Week.’ The pupils were encouraged to write notes or find a way to show appreciation for the staff body. Gemma’s class had certainly sussed out her propensity for handwritten missives and sweet things! The fresh thought that struck her heart was that not only does a thankful heart bring joy to the receiver, but also the giver. Pupils, when encouraged to be thankful, found they had more to be thankful for than they realised. And teachers, well their hearts were blessed through the simple act of acknowledgement.
Thankfulness also bubbles in Gemma’s heart as she praises God for the opportunity to have served as part of a team, and to have seen first-hand what God is doing in PNG. However, she is also thankful to all those who have been holding the ropes in prayer during a year that has seen several new churches planted in previously unreached areas, new works have started in other language groups, new translations have been given to people groups, and many new brothers and sisters have been added to the church.
Gemma is on the countdown to completing her term as an associate teacher in PNG, and could not be more thankful for the path that the Saviour has led her on these past months. Gemma’s faltering, fearful footsteps on this unknown journey have taught her truths about the Guide that she had not previously known. It’s impressed upon her heart the daily need to follow. God has given clarity and peace about returning home, but has also been continually reminding her through His Word of the need to simply trust, believe, and obey step by step.
Despite the pull of home, Gemma’s desire is to follow the Lord. At the moment Gemma is not planning to return to teaching this year as she is seeking to rest and believe fully in the One who has faithfully gone before her this year, for His plan for her life in the year to come.
Pray for Gemma as she says goodbye to those she has come to know and love in PNG and as she returns home and prepares for what the Lord has for her in the future.