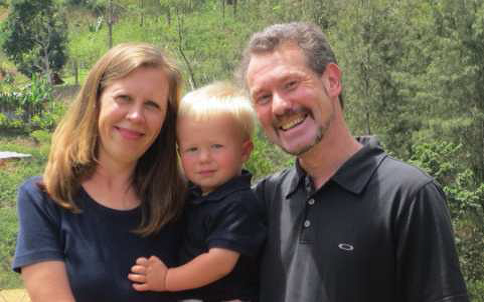 Since then Gerolf and Mailis have heard that actually two other people were saved. Praise the Lord for working in their hearts! They have been unable to continue with the next part of the chronological Bible teaching as there is no longer a place in which to hold the meetings. The Dom church members have been helping one of the new believers to build a proper meeting house (earlier they had been meeting in a self-made tent). The house is nearly finished and soon teaching of the group of new believers can recommence. Pray for the Dom man who will be teaching and the new believers. Gerolf will join him for encouragement and language exposure.
The very last translation check of the Dom NewTestament took place in February. Now the NT is completely translated! After the check Jim and a Dom believer worked on introductions to each NT book, footnotes and cross references. Prayer is still needed for deciding about the many little details regarding printing the Dom NT. Praise the Lord for providing enough finance for printing and shipping the NTs to Papua New Guinea!
In March Gerolf and Mailis spent ten days at the mission base buying supplies, meeting with different people, having dental checks and taking a few days for resting and relaxing. Travelling and
even doing shopping in overcrowded towns in PNG is not granted to be uneventful and smooth, but this time they had no troubles and they praise the Lord for that.
During the Easter week many of the Dom believers travelled to the neighbouring Kuman tribe for
the conference of the Simbu province churches that have been started through the work of NTM. People from both of the Dom churches went there and helped several of the new believers from the village that they reached out to attend as well. The believers care for the new Christians was so sweet and encouraging to see. The two main topics of the conference were the grace of God and marriage. Pray that the spiritual effect of the conference would be long-lasting.
Gerolf has been plugging away at Dom language and culture. At the beginning of May he had another evaluation by our CLA (Culture and Language Acquisition) consultants. It went well and Gerolf got further advice as how to continue with CLA. As a family they have decided that Mailis won’t do much CLA right now, but focuses on taking care of Richard, the home and several other matters that are not directly related to CLA. She still visits ladies in the village several times every week and learns informally a lot about the culture. Gerolf would appreciate your prayers for good and fast progress in CLA!
Last week their co-workers Jim and Judy returned to the USA for a yearlong Home Assignment. They
will also work on getting the Dom NT printed so they can return with it next year. Pray for an encouraging time for them and for a lot of wisdom for Gerolf and Mailis as they deal with different matters of everyday and church life during their absence.
Gerolf and Mailis will continue with the weekly ladies meetings that Judy has been conducting.
Mailis continues to teach chronologically in Pidgin English. Judy nearly finished the Old Testament lessons, so Mailis will be teaching from the New Testament for the next six or seven months. The attending ladies and teenage girls (on average 25 of them each Tuesday) are a mixed group of believers and unbelievers. Please pray for them as they listen to the Word of God and for Mailis as she teaches them week by week.
Just recently some men have shared that they would like to meet as a group once a week as
well. Gerolf and Mailis would like to encourage them in that and will open their house for that. The church is in need of more Bible teachers besides the one Dom believer and they hope that soon the church members will appoint some of the men to do that, so there will be some who can teach during those nights and on Sundays as well. Gerolf will preach once a month on Sundays.
Besides these two meetings the believers are also meeting every Wednesday evening in the church building. During those meeting the Dom Bible teacher is teaching them from the Acts.
The most challenging areas of their lives are marriage and relationships with each other.
Like his daddy, Richard is also fully in language study. He is trying to sort out the three languages he hears the most: Estonian, German and English, plus Pidgin English and Dom. He is saying a few words in each of the main languages. He loves being out in the village with mummy and taking hikes sitting in a carrier on daddy’s back.