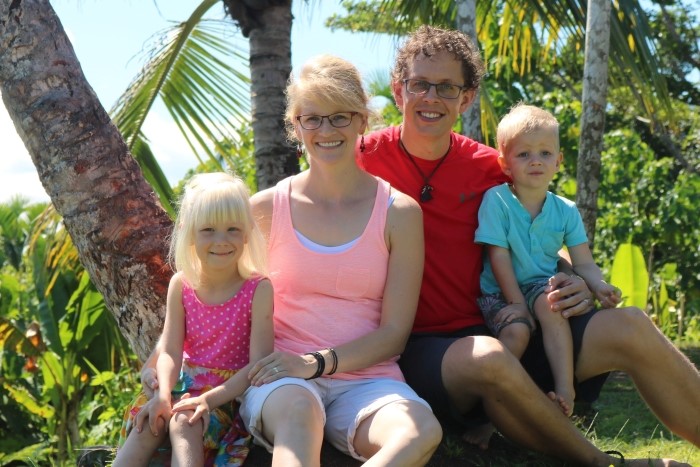 Five months ago, Christopher and Lilli Meyer with Linda and Silas moved into their own house in Kaje. There have been some things that they would rather have not experienced but is all part of living in the jungle. For example, they had gone to town in March, to take part in the annual regional NTM conference. They had only moved into their house two weeks before that and were not gone very long. When they came back though, they were ‘greeted’ by mouldy walls and furniture that had recently been built out of plywood. That was very unexpected, but the high humidity in rainy season explains it. Thankfully, the walls, which had been painted before they left, were not mouldy and they had brought in enough paint to get the mould under control.

Another ‘not-so-nice-thing’ was giant ants – Lilli had never seen ants about two centimetres long! Even though Christopher had tried to seal their house as well as possible, they kept coming in. And to top it all off, a few weeks ago, they had some other ‘unexpected visitors’ – mice, so they got a cat.

However, there are also many good, positive, and exciting things that they have to report! Their co-workers Jon and Taylor have been super busy with preparing the chronological Bible teaching in the Kaje language. Every week helpers arrive to help them write the lessons in a way that people from this culture will understand. Along with lesson writing goes the translation of the Bible portions needed for the teaching. That is such a big task! Both men have invested many hours into it already. Consultants for lesson writing as well as Bible translation came in and were very happy with the results. Christopher and Lilli are so proud of their co-workers.

The Kaje people can hardly wait for the teaching to begin! They have been waiting for this to happen for months, even years. So many times, they have told the missionary team of their fears and that they are completely hopeless and that only ‘God’s talk’ will be able to change that. One proof that they mean what they say is that they gathered in big groups and prepared large amounts of sago for the time of the teaching. It was amazing because people tend to live from hand to mouth. In addition, last week, most men from their village gathered to build a house for the teaching. It is not quite finished yet.

The chronological Bible teaching is going to start on August 15th and the team will teach four days a week over a period of four months. So exciting! Pray for prepared hearts to receive God’s Word and that many people attend the teaching.

Christopher and Lilli are still busy with learning more of the Kaje culture and language. Overall, they think they are making good progress. One of their language consultants came to check in on them in May and was able to give them some good and very helpful tips. They really benefitted from his visit. Please keep praying for them as they keep learning more about the Kaje culture and language.

Linda and Silas are doing great. Silas seems to know no other life than the ‘life in the jungle’. Linda loves it too. She is a little shyer than her brother is but has had many good opportunities to connect more with the Kaje kids around them. She is also very passionate about the upcoming teaching and it is great for Christopher and Lilli to see her excitement that her friends will soon hear from the Bible. She truly longs for them to become free from the fear that holds them captive. Christopher and Lilli are amazed at her understanding of these things. Lilli is planning to start to home school Linda in September. It should not be too stressful, as they will start with kindergarten and she is excited about it.