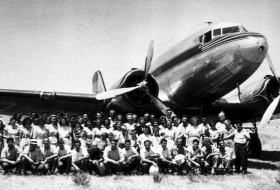 Travel by air is so … normal. That hasn’t always been the case, especially when it came to tribal missions. After World War II ended, Paul Fleming, founder of New Tribes Mission, was persuaded that aeroplanes were coming into the world picture, and he felt that NTM should plan to make use of them. God was leading NTM to begin its aviation programme.

Most of those early aeroplanes were very small, capable of hauling only two or three passengers and limited cargo. But in 1949, NTM realised that due to rising costs for tickets (if available) and delays en route, the purchase of larger aircraft for transporting groups of missionaries to their fields of service was a possibility. A used DC-3 and later a surplus C-47 were purchased. One crashed due to airport error and the other due to inclement weather. No other large aircraft were purchased.

A small number of missionaries who held private pilot licenses purchased smaller aeroplanes for personal use and for assisting other missionaries. As helpful as these individual aircraft were to reaching tribal people, there were issues of technical support that needed the Mission’s oversight. It was with these considerations in mind that Tribal Air Communications (TA/C) came into being in 1969. (Thirty years later, the name was changed to NTM Aviation.)

Since the 1940s, NTM has used aeroplanes and helicopters to sustain missionary teams as they develop thriving churches in remote locations. NTM Aviation is looking for people to help take the Gospel of Christ to the nations: pilots, mechanics, avionics technicians, promotion and communications experts and other support personnel. Pray for NTMA around the world.