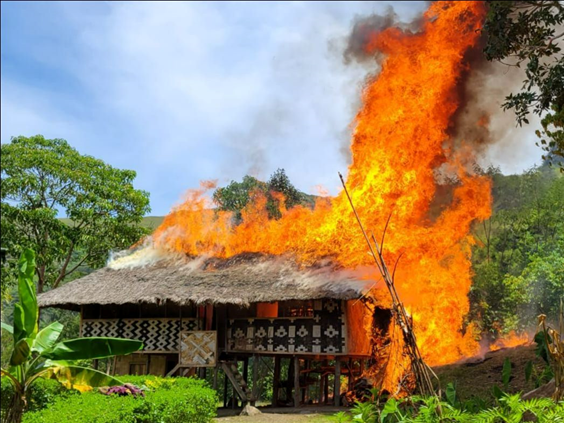 In the Dinangat tribe in Papua New Guinea, while the Schlegels and Markleys were visiting to work on translation, one of the Dinangat Bible teacher’s houses caught fire (see picture). While literally, everything he owned was going up in smoke, the Bible teacher quoted a verse that he and Jeremiah had been working on earlier that day. Matt. 6:19-20 “don’t store up treasures on earth.”

Afterwards, it was beautiful to watch the church come to his aid by donating clothes, pots and pans, water containers, etc. The pain was still there, but he said an amazing peace was covering him!

Gary and Esther Smith former Dinangat co-workers are now primarily working in “support” ministries. Esther serves as the Field Home School Coordinator; and Gary, as the Personnel Director. They serve in these roles with a passion to see churches developed in PNG. In the past several months, they have seen God working in the entire gamut of the church planting timeline moving forward…

New missionaries are still arriving! One of whom is their daughter, Charis, and family, who have completed the first third of their orientation to the field and have just recently begun the next part in bush orientation in a tribe called Amdu, with existing missionaries and a young church.

Three families have teamed up; and are in the process of moving into Kuyu a new tribal location. One of these families is Esther’s brother, Jonathan Ames, with his family.

Some teams have completed “Tribal Culture Language Acquisition” and are approved for formal ministry into literacy, Bible translation, and Bible teaching.

One language group, called Maliyali, will begin hearing the evangelistic chronological teaching for the first time in the coming weeks.

Many places continue training and equipping, and in Iski the church is seeing believers growing in maturity.

Bible dedication: On the other end of the spectrum is the blessed event of giving a completed New Testament and portions of the Old Testament into the hands of the believers. This is being done in a tribe called Tigak next month!

All of this is why Gary and Esther do what they do!

This month they will be going to the capital city again for a follow up MRI for Esther. They need to monitor the progress of her acoustic neuroma (a benign tumour on her auditory nerve in her brain) that was discovered in November. Please pray that the tumour will have shrunk and will not need surgery.

For wisdom and grace for Gary as he works through challenges in ministry.

While in the capital city, they plan to take a much-needed short break. Pray that the Lord will provide for them and that they will rest in Him. Pray for their four children too, who are at different stages of life, married with family, going through college, and finishing school.