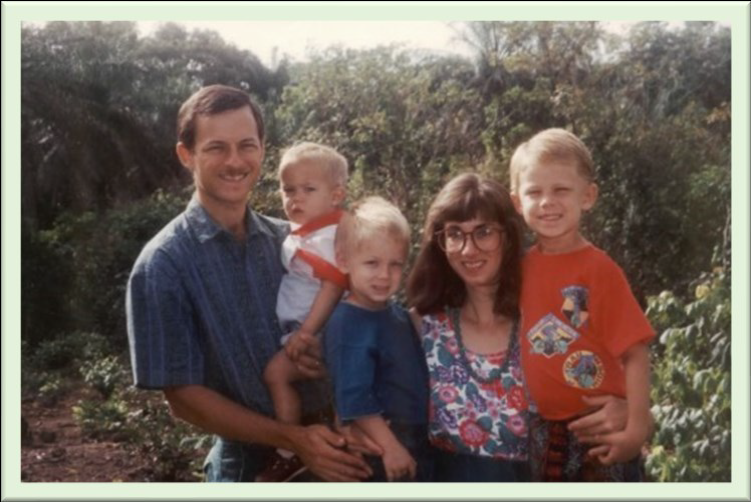 Not long after their arrival, all those years ago, they met a man who was one of the few people in the village who could speak French, which they had studied the previous year in the nearest town. He was also the only one who could read and write French. These abilities enabled him to be a great help to them as they learned the language and culture of his people, developed an alphabet for them, wrote literacy materials, and translated the Scriptures. Through his exposure to God’s Word and a heart wanting to know the truth, Masalu came to believe the Good News of Jesus, and as far as they know became the first Landuma person to be saved.

During the years they were learning language and culture, translating the Scriptures, and preparing to teach the Bible, they attended many funerals. It was always heart breaking as they knew the deceased had not heard and believed the Good News of Jesus, but had been trusting in their good works to outweigh their bad in order to get to Heaven. The first two Landuma believers were baptised in the river near the village in 2005.

Several families and singles have been co-workers with them in the village over the years. Kirk and Yolanda’s children grew up in Africa and attended the school set up for the missionaries’ children. They are so thankful for the teachers and many other support team workers who assisted them in countless ways as they worked in the village.

As they continue to translate the Bible and disciple the church in the village, which includes Landumas, as well as several from other people groups, Kirk has many opportunities to preach the Word to unbelievers and he also teaches kids the Bible two nights a week.

Prayer was sought for those who Kirk and Yolanda help with medical expense, that they would see God’s love for them expressed through them and would seek to know more about Him. God is answering that prayer.

Please pray for “S,” a long time friend in the village who has had serious health problems for over a year. The Rogers helped him get many tests locally, he was diagnosed with serious liver disease at a city hospital, and is now back home, with a poor prognosis. They are helping him get some nutritious food, and praying for God’s healing for him. This friend helped them with Bible translation in the past and was impressed with the Word of God. He has been listening to the Landuma Bible and to Bible lessons. Kirk has had many opportunities to teach him the Scriptures. Some members of S’s family are also listening. So far, it appears he believes what he has heard. Please PRAY that he and his family would have good understanding and believe the message.

A phone company has told the villagers they will be installing an antenna nearby. That would be a great help to Kirk and Yolanda as they continue to struggle with lack of network coverage. PRAY they do build the antenna, and that it happens soon. In spite of that possibility, they are working on raising their home antenna higher in hopes of again obtaining a usable signal. Kirk has been working with some friends on a project to put the antenna up above a tall mango tree near their house. PRAY for safety as they work high up off the ground.

Thank you so much for being a part of the work Kirk and Yolanda do among the Landumas through prayer.