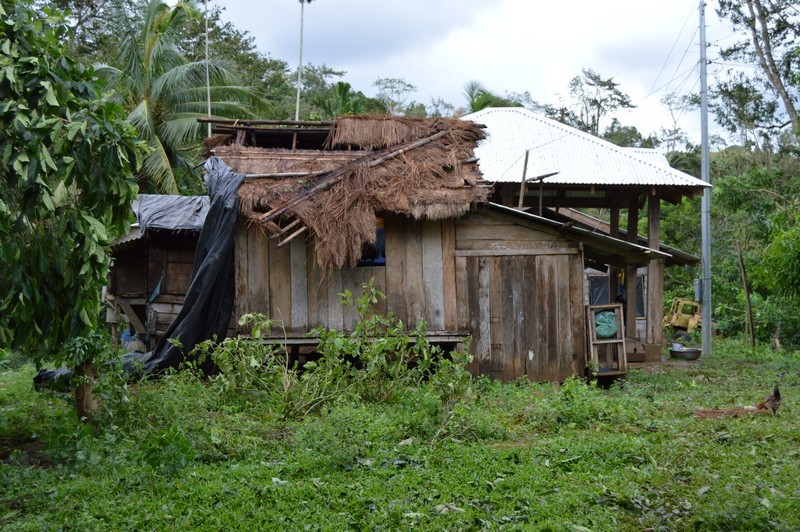 They emerged to see what damage had been done around the village. A few grass roofs partially blew off, including their neighbour’s roof. Thankfully their neighbours had spent the night in the Easton’s basement apartment so they didn’t get drenched. In another part of the village, one branch of a tree landed on a house that was unoccupied.

Other than that, the Lord aimed the hundreds of fallen branches and trees away from houses. It was pretty incredible to see. They were so thankful that there were no injuries nor loss of life in their village.
Pray for the Ga’dang people as they try to salvage their damaged crops and function without electricity which may not be restored for a while.

The typhoon affected other locations of NTM workers nearby more severely. Please pray as these teams are involved in ongoing relief work and repairs to their own homes.

Dennis continues to make good progress in his language sessions with his helper. There have been a few interruptions lately due to the typhoon and harvest but Dennis can listen to recordings when not working directly with his helper. Praise the Lord for this progress and for deepening relationships with their neighbours.

Pray for encouragement for Dennis and Valerie with children Lael, Aria, Quinn, Cambree and Theo. It can be lonely and emotionally taxing living in the village which is quite isolated. Pray that they’d keep their eyes fixed on Jesus.

They are thankful that their co-workers (the Talbots) were able to return to the village from their home assignment this month.

Thank you for praying for the Eastons and for the Ga’dang people.