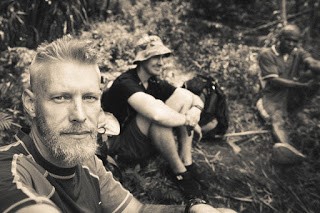 By God’s many special graces they were able to make the entire 48km trek, ascend over 10,300ft, descend over 9,600ft, crossing rivers and landslides with no more pain (for the most part) than tired muscles. Overall, they were able to accomplish what they had hoped!

At each village they asked if the people might be interested in a church planting ministry being initiated there. All but one of the villages were pretty excited about the prospect. The invitation extended by the two closest villages to the Mibu area was beyond emphatic, and had the unanimous agreement among their leaders. This confirms what they have been hearing for several years now!

God has been working on several fronts to prepare the hearts of the people to hear and respond to His Word.

Having two leaders from Mibu church accompany them on the trip was perfect! They are the ones who are planning on helping in any ministry efforts possible in Jerung. Their insights and cultural wisdom proved invaluable as they looked at each place, listened to people’s stories, and tried to evaluate where ministry might best be initiated, and what it might look like! It was really good training for them to be a part of that evaluation process; to get a better feel for some of the things that need to be evaluated. These two men were much more sensitive to subtle cultural overtones that expats have a hard time noticing!

The Mibu team has been getting a clear invitation to the Jerung language for several years. The survey has confirmed their openness and given the team a chance to sit with the local leaders personally, and also to evaluate each place, and how dialectical differences between places might play into the decision of where to start. Now they will compile all this information into a report, share it with the field leadership, and make it available for those prospective missionaries who are trying to decide where they might best go to be a part of the spread of God’s Word. They’ll now have much more information than they’ve had in the past. Pray for the placement of a couple of families in Jerung, in partnership with the church in Mibu!