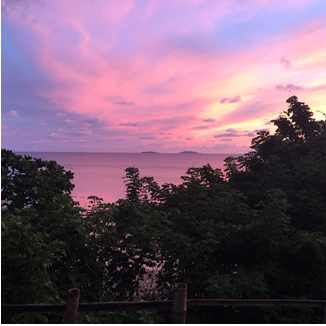 Much to their surprise, a few weeks ago Phil and Vina le Roux’s town generator came on at 8am and ran until midnight.
They were delighted to hear that they have started a new 16 hours a day electricity supply for the foreseeable future. What an unexpected bit of news! This means they can now run an electric fan at the hottest times of the day! Initially their sleepy island became party central with everyone playing their music really loudly ALL day. They really began regretting the 16 hours of power. But, thankfully, things have settled down and life is almost back to normal. Except cooler!

Phil and Vina were quite disappointed that it seems they cannot get a new language evaluation scheduled until next year. This means Phil will have to wait until then to have his progress evaluated. This will be when they were hoping to start teaching. Please pray for Phil as he continues to study the language and wait upon the Lord for His perfect timing.

The le Roux’s visas expired last month and they were in need of being renewed for another two years. The Lord has done amazing things! For the first time they have allowed a child of their oldest daughters age to continue under her father’s visa! So there was no need to leave the country! It’s exciting to think that it is perhaps within these next two years that there may be Agutaynen brothers and sisters in Christ!

Not much progress has been made on the landing strip this last month. They have no fuel available for the heavy equipment which is causing delays. Last week they did remove 50 coconut trees that were in the flight path at the end of the runway. It’s a work in progress, albeit slow progress.

Thank you for partnering with Phil and Vina to reach the lost they value your prayers, especially for safety.