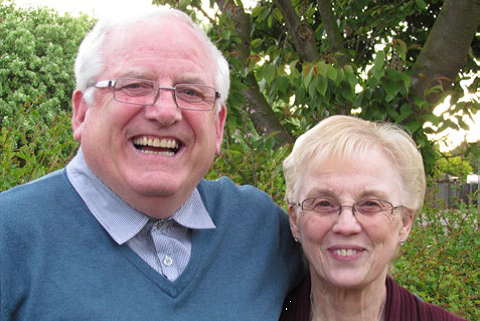 Barry and Chris flew from Manchester to Dublin to catch their flight to San Francisco. They were surprised at the ‘USA Immigration Desk’ that their paperwork was received and they were welcomed into the USA by the immigration officer with a stamp in their passports. This meant that all Barry and Chris had to do in San Francisco was collect their luggage and greet their family. They were happy travellers to say the least, rejoicing at the Lord’s work on their behalf.
For Barry it was the first time that he had seen his grand-daughter Aria Rose in person and not on SKYPE. She is the apple of his eye and she already has him wrapped around her little finger!

Barry and Chris would value your prayers as they take their driving tests. They have both passed their written tests but now have to take a road test! Also pray for wisdom in purchasing a car.
Pray for their search for medical insurance cover. Barry and Chris thank their God that they are both healthy at this time.

Barry and Chris’s son Nathan and wife Sarah had been busy building an addition to their home for them. They had worked many long hours and spent many dollars on the building. However, the local council inspector visited and told Nathan that he would have to submit detailed plans drawn up by
an architect. When the architect visited he told Nathan to get a structural engineer to check the roof. After assessing the costs involved Nathan and Sarah decided to demolish the building. So they have been a demolition team for the past weeks. Barry and Chris are heartbroken for them as they have seen their labour of love being torn down. Barry and Chris are living with them at present but are considering their future options. They are considering a move to Arizona. Pray that the Lord will once again work some miracles for Barry and Chris and show them something suitable!

Barry and Chris thank their God for the life that they have in Jesus and for the days that He has given them to serve Him!