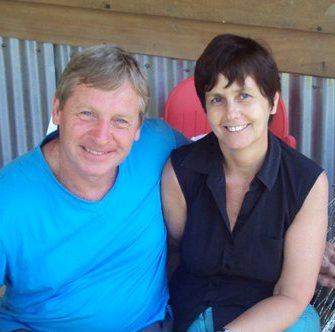 In January Angela took four ladies, two from England, two from N. Ireland and two young lads from Germany to the Philippines to run a children’s programme while the missionaries attended their annual conference. They had a couple of busy days in Manila putting together the programme that they had individually been preparing beforehand. God united and used them with their different talents to teach the 45 children over the four day conference. Angela was also asked to speak at the ladies banquet, which she found a bit nerve wrecking. But God really helped her, and the ladies were encouraged.
In February Norman and two men headed to Manaus, Brazil to work for two weeks at the NTM School. The two men were both good welders and they worked really hard making steel trusses for the new school roof which the summit team will put on in July.
Norman and Angela are leading the Brazil team and Peter Bittle is taking the team to the Philippines. They ordered and paid the deposit on 21 seats in December in faith that God would provide people. At one stage they thought that they would have to cancel the Philippines team and lose the deposit. However, the Lord was teaching Norman and Angela to wait! In her daily reading the Lord brought to Angela’s attention the faithless Israelites in Exodus who, though they had seen God work in such miraculous ways to deliver them from Egypt, complained and murmured and did not trust the Lord. The Lord said to me, ‘You are just like them! Remember what I have done for you in the past!’ As she took time to look back on previous years and reflected on how the Lord worked everything out, it brought peace to her soul. The Lord brought the people, and Norman and Angela praise the Lord that both teams have been filled. Please pray for safe travels and good health for both the Philippines and Brazil teams.
In May Norman went to Thessaloniki in Greece to continue work on a camp site. It was a tough project digging foundations and laying concrete for the floor of the conference hall, but it was completed the evening before he flew home. Norman has had a bad back since before Christmas and has been having physiotherapy; please pray that his back will heal.
Norman and Angela would value your prayers as they go to North Cotes on the 29th June for orientation and then as they lead the team to Brazil, 1st -22nd July. Their son Caleb is also going to Brazil and then to Canada to work at a Christian kids camp. Please pray for him as he is travelling on his own. Earlier this year he managed to break his fibula while playing football and had to get a plate and seven screws put in it.
Norman and Angela had two big celebrations here this year as Norman’s mum turned 80 in March and then Norman turned 60 in April. Rebekah, Norman and Angela’s daughter, visited for both birthdays, so that made it special for her Gran and Norman. Only their son Matthew was missing but they were able to talk to him by phone. Matthew has started his own business in Australia which keeps him busy. Pray for Rebekah as she goes on a short mission trip at the end of July to see where God wants her to serve Him in the future.