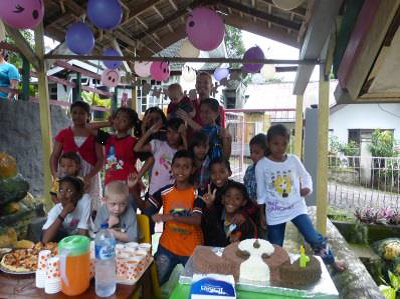 Sasch, Charissa, Ruben and Judah have now spent over three months in the new area of the country where they serve and are feeling very much at home. Their neighbourhood is quiet and friendly, and Ruben has become good friends with the little boy across the street. They have been blessed to find good churches where they can worship with other believers and Sasch has already been privileged to preach several times. They are also glad to have had the opportunity to get to know several expats from other organisations. Part of Sasch and Charissa’s goal is to prepare the way for other families who want to serve in this area.
Sasch and Charissa had hoped to visit an even more rural area again for at least a few weeks as a family. Due to lots of rain and increasingly bad roads this didn’t work out. However they know that God is with them and directs their paths, which is a great encouragement to them. Sasch did have the opportunity to spend two weeks there in April working on a project that has been underway for many years, to provide electricity to the village via a water wheel. He went along with a friend and they were blessed with safe travels and were pleased to have accomplished their goals. They repaired the generator and connected all of the houses to the power source. Although there is only enough electricity for a couple of light bulbs per house, the people are very happy to have that much. Sasch and his friend even had time to finish some other minor projects and repair jobs that had piled up, such as fixing the lawn mower used to mow the airstrip.
It was also encouraging for them to see the progress the church has been making, although the believers still face many challenges. Please pray that they will keep progressing in their spiritual development and pray that God will raise up elders who will be able to be equipped to lead the church.
In missionary work it is necessary to be flexible with short and long-term plans, which are often subject to change. Originally Sasch and Charissa had planned to go on home assignment next year, but in order not to interrupt their language and culture study; they will be making their way home (USA and Germany) in July this year! They have just booked their flights and that means they have less than two months left in the tropics this year! From the beginning of July they will spend six weeks in the USA, and then they will be in Germany until the end of January.
As a family they are doing well. Judah turned one year old in March! He is the happiest, cuddliest little guy, and very intelligent. However, at 14 months he still has absolutely no interest in walking. He loves reading books and is fascinated by holes of all sizes, which must either be covered or filled! Ruben is progressing both in maturity and vocabulary. Recently he has voluntarily been writing his letters. Please pray for him especially in the next few months. As they near the time for moving, he has already begun showing signs of insecurity. Sasch and Charissa will need wisdom in how to make the transitions as painless as possible.
During their remaining time before home assignment they are likely to be travelling a lot. Sometime in the next few weeks they will need to return to the city to renew their visa for another year and attend a conference in another city. Sasch and Charissa are hoping the timing will be right so that they can pack up their house and just make one trip, which would cut travel costs considerably. Please pray that the kids will be good travellers and not be traumatised as they are uprooted yet again.