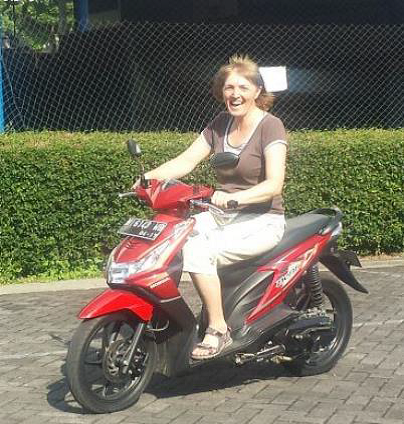 At this moment, Karin would like to stop the time so that she could capture everything that she is experiencing. But then, the Word of God confronts her again and she realises that she cannot capture everything, nor does she have to…
Recently, when Karin was shopping, a toddler ran through the store, repeatedly taking things off the shelf, holding them up and asking his mother “Apa ini?” Exactly the phrase Karin currently uses the most “Apa ini” – “What is this?” To realise that she is as far as this child in her language studies (or not?) made her smile.
Karin is in the second half of stage 1 (of four). This stage lasts approximately three months. A book with daily lessons guides her through different areas (for example, fruits, plants, animals, household items, body parts and the verbs that go along with them).
Everything Karin learns now, even the method, is intended to prepare her for the future learning process of tribal language; just a little grammar and conversation in school (because she will not have that option later) and mainly learning with the language helpers and the people around her. The book is a great help to ensure that all the basics are learned, but she still has to work out the suggestions, which also require a certain amount of preparation time. Four times a week, a language helper visits Karin at her house to go through the prepared lesson. Last week Karin advanced from the “just listening” time to the “learning to speak” time; she repeats the language helper’s sentences to get the pronunciation, stress and intonation corrected – exciting.
Karin thanks God for good relationships with the NTM team, language helpers and neighbours and, with the help of the Lord, is advancing in language learning.
Pray for Karin to develop good time management, for continued progress in the language and understanding of the culture and the people. Also, that despite all the learning tasks, Karin will still have time for the people God puts in her way.
Karin always look forward to the church service in a village in the mountains (20 min away from the city), even if it starts at 8 o’clock and she is picked up at 7:20. The people there are all really friendly and welcoming, even though Karin cannot really communicate yet (but she already sings the hymns). No matter how big or small the churches are, Karin has been impressed by the excellent organisation, the commitment and the inclusion of many people, young and old in the church service.
Karin is now allowed to ride a motorcycle. At the moment, it’s still just in the neighbourhood but soon she can join the city centre chaos.