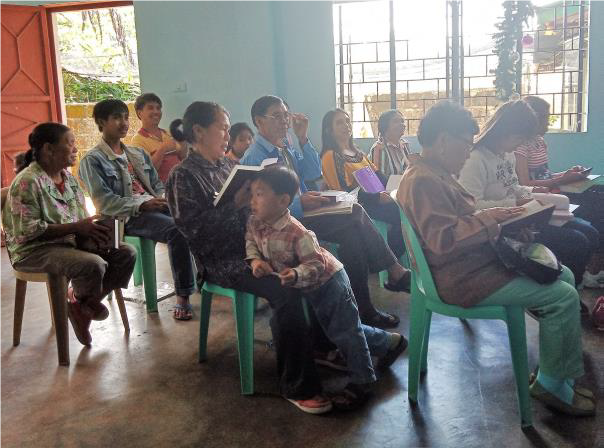 Ragnar and Elizabeth Niclasen are thankful that during the last few weeks they have been able to spend some awesome time with four groups of believers in an area – about a two-hour drive north of where they live on the Island of Luzon in the Philippines.

Among the first group, the meeting began with one of the believers teaching a lesson from Phase 1 of the chronological Bible teaching lessons. They shared with Ragnar and Elizabeth that they want to practise teaching the believers first, so they will be prepared to share this great news with people who are hearing it for the first time. What a wonderful surprise!

At the end of the meeting, the second group talked about going on to their various outreaches. Ragnar and Elizabeth learned that they have divided into groups, going to three different places in the afternoon to teach Phase 1 to people longing to hear His Word. Their hearts were thrilled!

On Easter Sunday Ragnar and Elizabeth visited the third group. (Although the believers were completely unaware that it was Easter). It was wonderful for Ragnar and Elizabeth to sit in the audience whilst one of the men who helped them write the original lessons taught about Christ, and what He has done for us on the cross. They were very encouraged.

When one of the elders from the fourth group told the believers about the box of new Bibles that Ragnar and Elizabeth had brought with them, they were delighted to see lots of big smiles and people standing with their arms stretched out to receive them. Ragnar and Elizabeth’s smiles went from ear to ear!

Your part in prayer for the work God is continuing to do amongst the Kankana-ey, is very much appreciated. Ragnar and Elizabeth are so thankful for the blessing of working with these dear people. It is absolutely thrilling for them see the believers so excited about sharing His Word, to those around them – many who are hearing it for the first time.