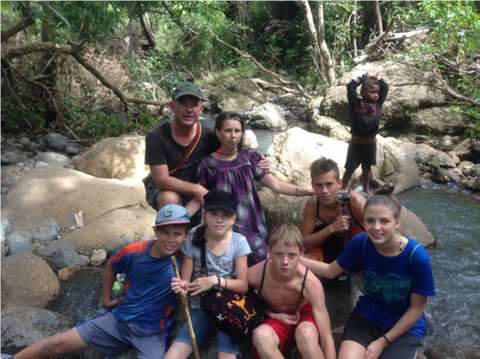 Jan Peter has recently returned from the Wusuraambya tribe. The building project was a Sunday school/literacy building. This building was a huge blessing to the approximately 65 children and their leaders who have been meeting under a tarpaulin for a number of years, even on the windy, rainy days! Everyone helped carry the building materials to the building site. The work could then begin with Raymond, Jan Peter’s co-worker and the five faithful Bible teachers.

Some of the villages in the Hewa tribe are the most isolated in PNG. Three American families hope to move in to this tribe soon. Once their houses are completed, they will begin culture and language study, writing an alphabet for this language and eventually translating the Bible. So the Gospel will be explained thoroughly. Jan Peter hopes to be part of the beginning stages of this work. Pray for God’s protection for the new families as they trek inland to the remote village. Also protection for Jan Peter when he goes to cut down trees and slab them.

Each year, a team visits the NTM centre for the Spiritual Emphasis Weekend for the High school students. The programme they organise includes encouragement from God’s Word as well as lots of fun and games. Anja thoroughly enjoyed being on the team of mothers who cooked for the 85 people involved.

Because NTM’s mission medical centre does not have sufficient staff to help all the neighbours living nearby, the doctors decided to take a morning to conduct an outdoor clinic in one of the villages on a regular basis. During one of these clinics, Anja was the translator for a visiting doctor from Northern Ireland. Just before Christmas, in the three hours that the clinic was held, about 90 patients were seen. Josanne had the privilege of taking their blood pressure.

In the last six months, more than ten missionaries have had to be evacuated from PNG to receive medical help. In a number of cases for appendicitis and heart problems. When an evacuation is necessary, many people are involved. Since every minute counts in an emergency, everyone needs to know his or her role. Therefore, practice runs are necessary. Josanne was chosen as ‘guinea pig’ for one of the training sessions. The mission now has three Kodiak airplanes and enough pilots who are trained to fly to Cairns, Australia for medical evacuations when necessary. Pray for good health for all the missionaries in PNG.

The Mol family went to visit the Wycliffe/SIL centre an hour and a half drive away for Christmas. Presently there are six Dutch families living at the centre. They also met a young single lady who had just arrived in PNG, who will be teaching Dutch at the school there.

Bjauke was invited to spend a week with his friend Noah in a coastal town. Since his friend has no Western boys his age living there, it was a treat for both of them. Mattitja completed her Middle Ages school project. The students did a play, made a large information folder and they even made “stain-glass windows”! Cefas helped by making real windows in the classrooms. The window frames had rotted out so they needed replacing. Nathanaël helped build two crates, one for a retiring missionary couple and one for themselves. Their crate is for their return home to the Netherlands. Since they have started filling the crate their house is getting cleaned up nicely!

Pray that a place would open up for Cefas and Nathanaël at a good school of God’s choice.