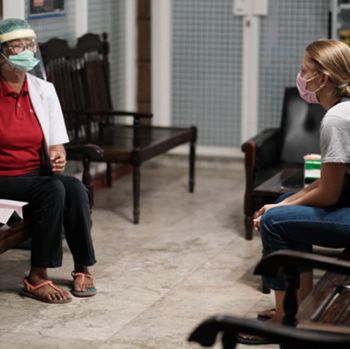 Kristine serves in Asia-Pacific and has not been outside of town since February, and it has been a bit hard at times. The missionary team do not have permission to visit any of the villages yet, but they hope they will be able to go next month.

Most of the youth went on vacation to their villages when they had time off from school for about a month or so. Some of the parents were worried about corona, and wanted their kids home.

During this time, the team took the opportunity to fix-up the old boy’s dorm together with a few of the kids that stayed behind in town. The other dorm will be torn down and rebuilt, so the youth will have to move temporarily to the old dorm. Pray that the dorm will be rebuilt quickly.

For a little while, they were able meet together with just a small group of the youth for Bible study. They enjoyed this time because they are less shy and more talkative in a smaller setting. Now most have returned to town and have school lessons online. Since there is a bit less schoolwork for most of them now, they have been meeting twice a week for Bible study, as well as football and volleyball. Recently the team taught a first aid course again, as many of the newer kids were not part of the last one. Pray for more co-workers. Pray for strength and encouragement in the work.

A few weeks ago, there was a medivac (medical evacuation) of an older man to town from his village. His chronic heart failure had worsened, and he was not doing well. It has been hard for the villages to get medical help since doctors are more reluctant to travel now because of corona. Kristine was able to help explain about the disease and the medicines, and be a go-between for the villagers and the doctors, which was a bit challenging at times. Kristine was also able to spend some time with an elder from one of the villages to talk about medicines. He is diagnosing and distributing medicines in his village without much help and only a little bit of training, which is also quite challenging. Many people are counting on him. Two village girls are currently going to nursing school in town and it is hoped that he will get some more help in a couple of years!

Continue to pray for the youth in town and the ones in the villages, that they will have a hunger for God’s Word, and take more responsibility in teaching the younger kids.

Thank you for all your prayers!