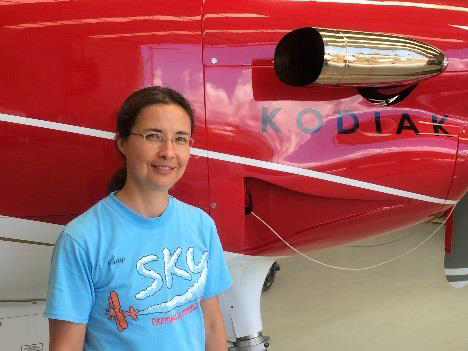 Miriam also feels at home and part of a big family on the NTM centre at Lapilo, Papua New Guinea, where she lives with many other missionaries who work in support. They all enjoy missionaries passing through from different locations and hearing their stories and of their hardships first-hand.
Miriam recently had the opportunity to fly with the new Kodiak which has been in use since 30th November when it had a test flight. The proving flight with CASA the aeronautical authority of PNG was on 2nd December. As they wanted some passengers on this flight Miriam had the privilege to fly with them which was awesome! This aircraft is much quieter than the Cessna and the seats are much more comfortable.
The second of three Kodiaks has now arrived in PNG. The aircraft is already scheduled for flights to a conference in this month on New Britain; its first flight is planned this week.
Pray for wisdom for the mechanics as they have to maintain several aircraft of differing types. There is also a need for a flight co-ordinator.
Miriam is thankful for prayers regarding the drought. The gardens are once again flourishing.
This month Miriam plans to go to Australia for two weeks so that she can renew her passport. Pray that everything goes smoothly and that she won’t miss the appointment at the Swiss Embassy. Also pray that she’ll be open to what the Lord has for her during those two weeks.
Also pray for Miriam that in everything she does, she will depend on the Lord and not on her own wisdom and strength.
Miriam is thankful that she is able to serve the missionaries and the people in PNG. Pray for the health of all team members and their families and that the two mechanics who are en-route to PNG will have the necessary support they need so they and their families will be able to join the team in PNG this summer.