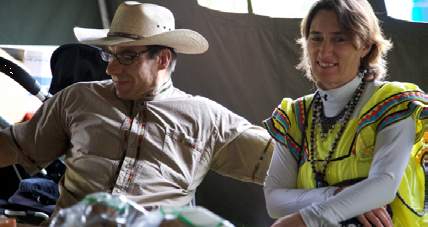 Several of the graduates will be heading to different parts of the world over the next year or so, and this is exciting to see. Some are returning to take the linguistics course, so Jonathan and Rachel look forward to having them around for another year.
Shortly after graduation they head to Colombia for two weeks. Jonathan will be involved in teaching a workshop on curriculum development. This will be the first time the workshop will have been presented in Spanish and they are excited to have several bilingual tribal church leaders planning to attend, including one of Jonathan’s old language helpers from the Emberá tribe in Panama. Please be praying for clarity as several of them will be teaching. Also pray that all the attendees can make it to the workshop in time as: weather, security and funding issues can all affect their travel arrangements.
After two weeks in Colombia, Jonathan and Rachel are looking forward to spending some time with their children and grandchildren in the USA. Unfortunately they can’t stay in the USA quite long enough to be around for the birth of their third grandson at the beginning of September as they have to be back at North Cotes College for the start of the new term. Jonathan is going to be taking more of a role in the Cross-Cultural Communications (“3C”) course which will mean an increased teaching load, particularly in the autumn. They are handing over the responsibilities for the short term ministries to someone else so that they can dedicate more time to the 3C ministry.